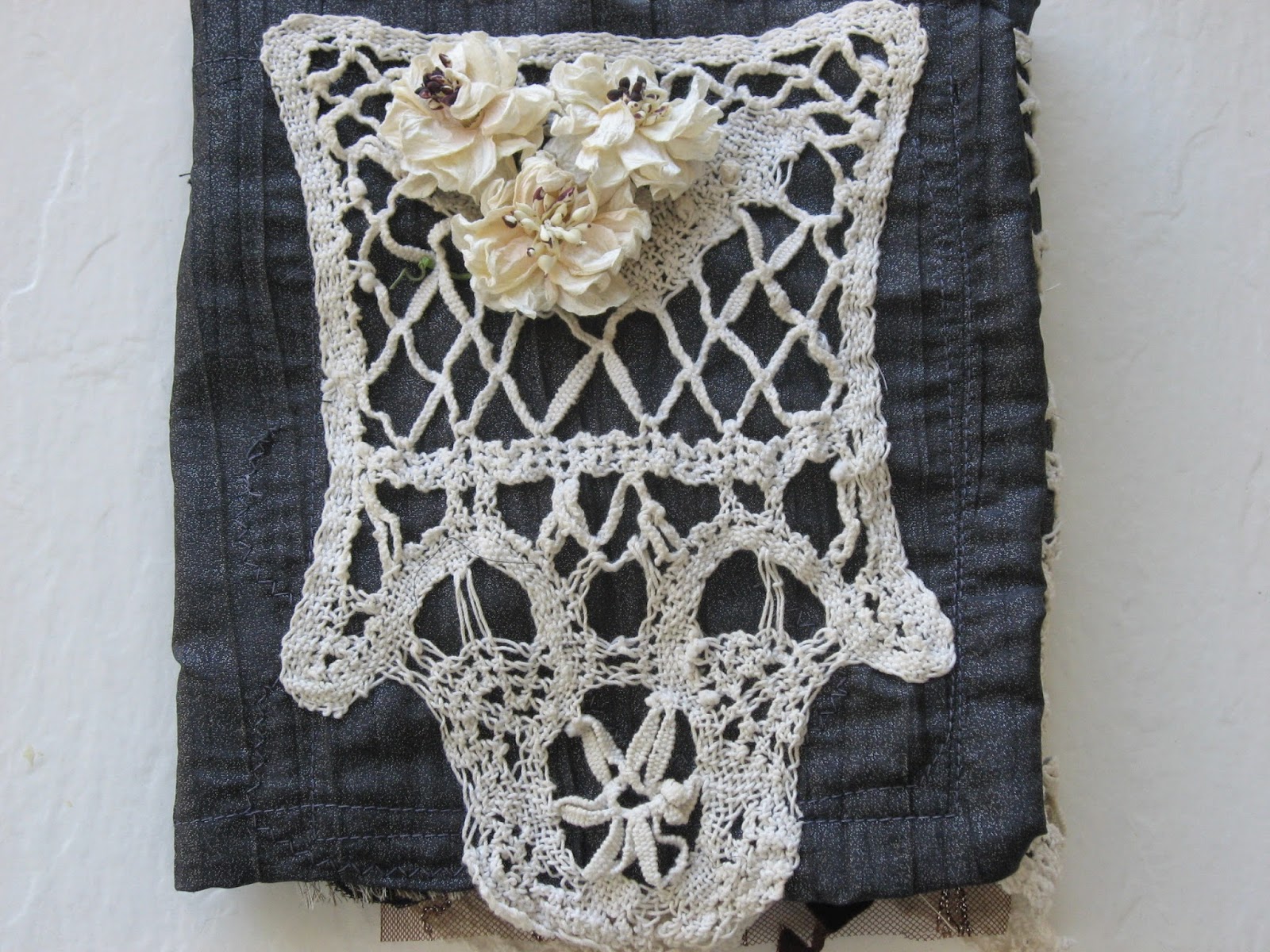 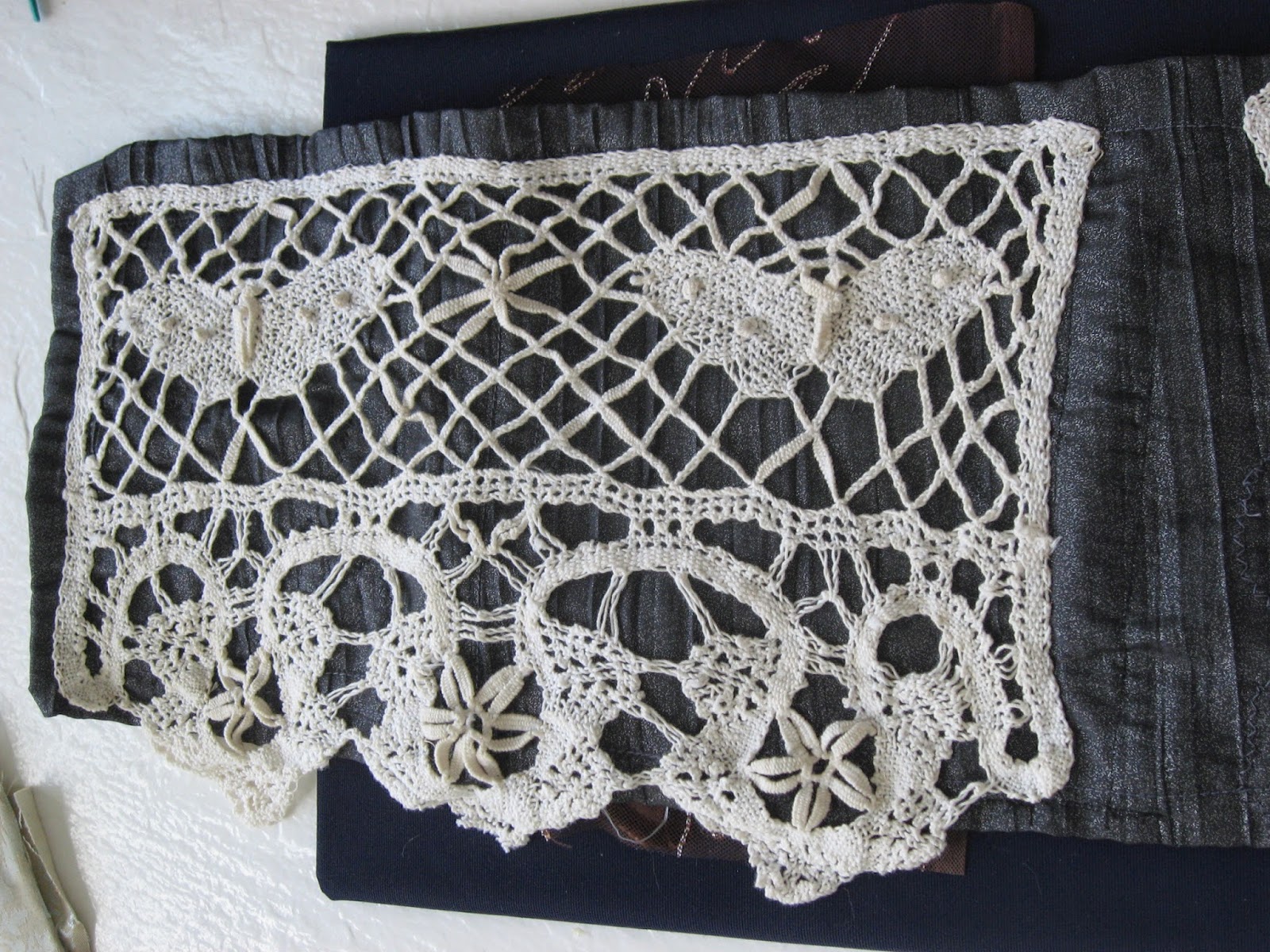 This is the middle and the back. 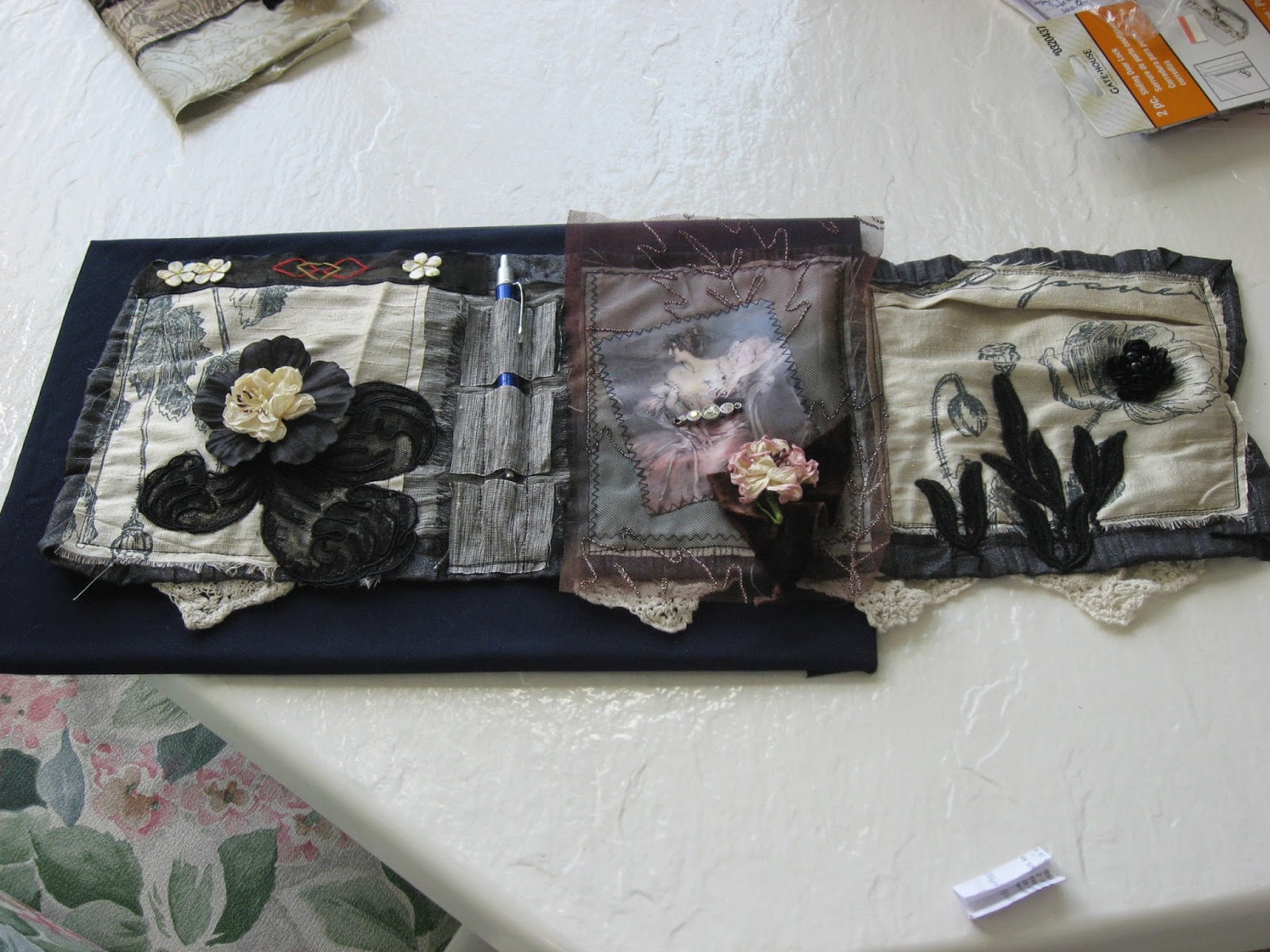 This is it open with the 3 panels showing and there is a space for a pen or pencil. 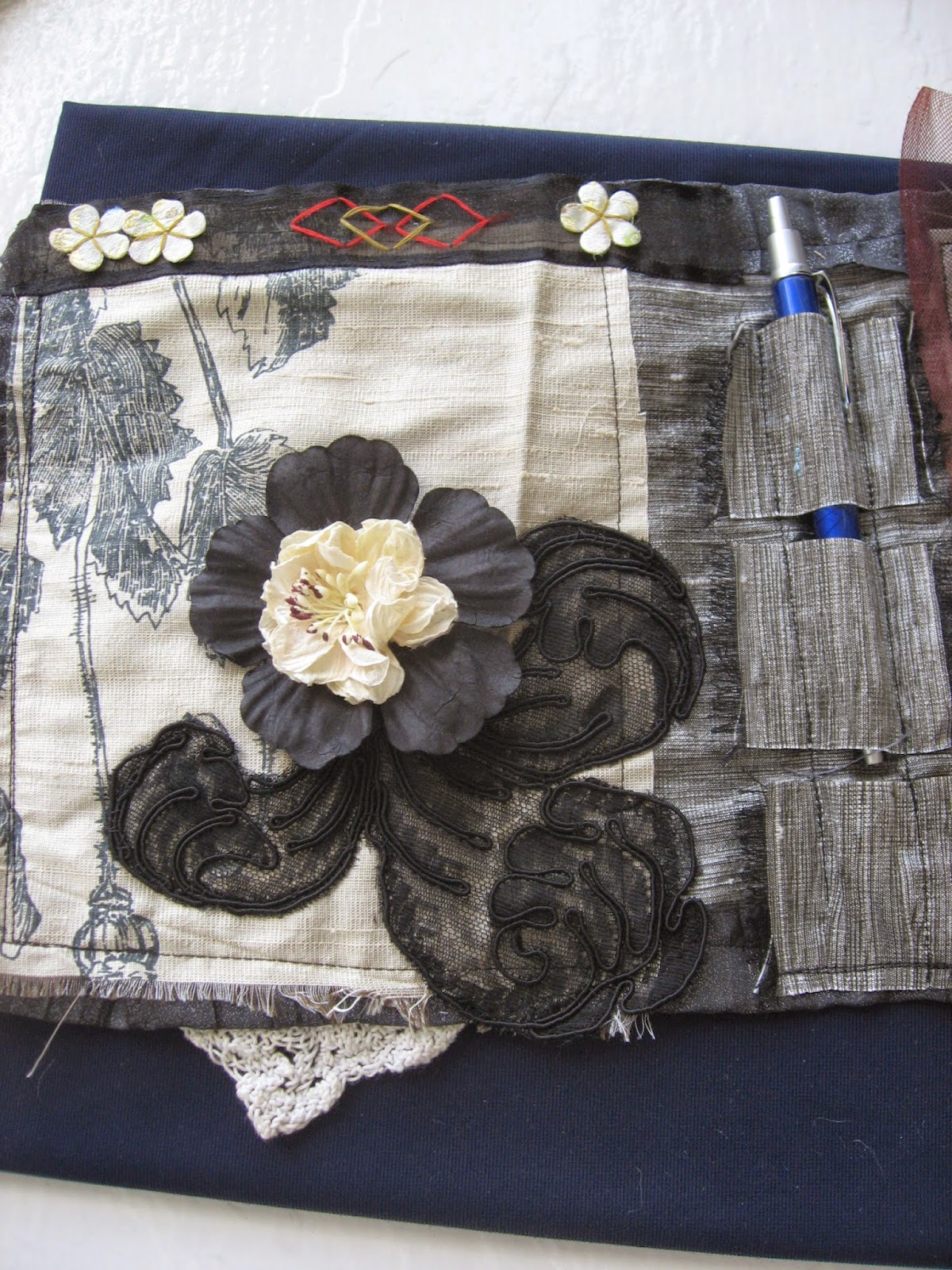 This is the inside front page. 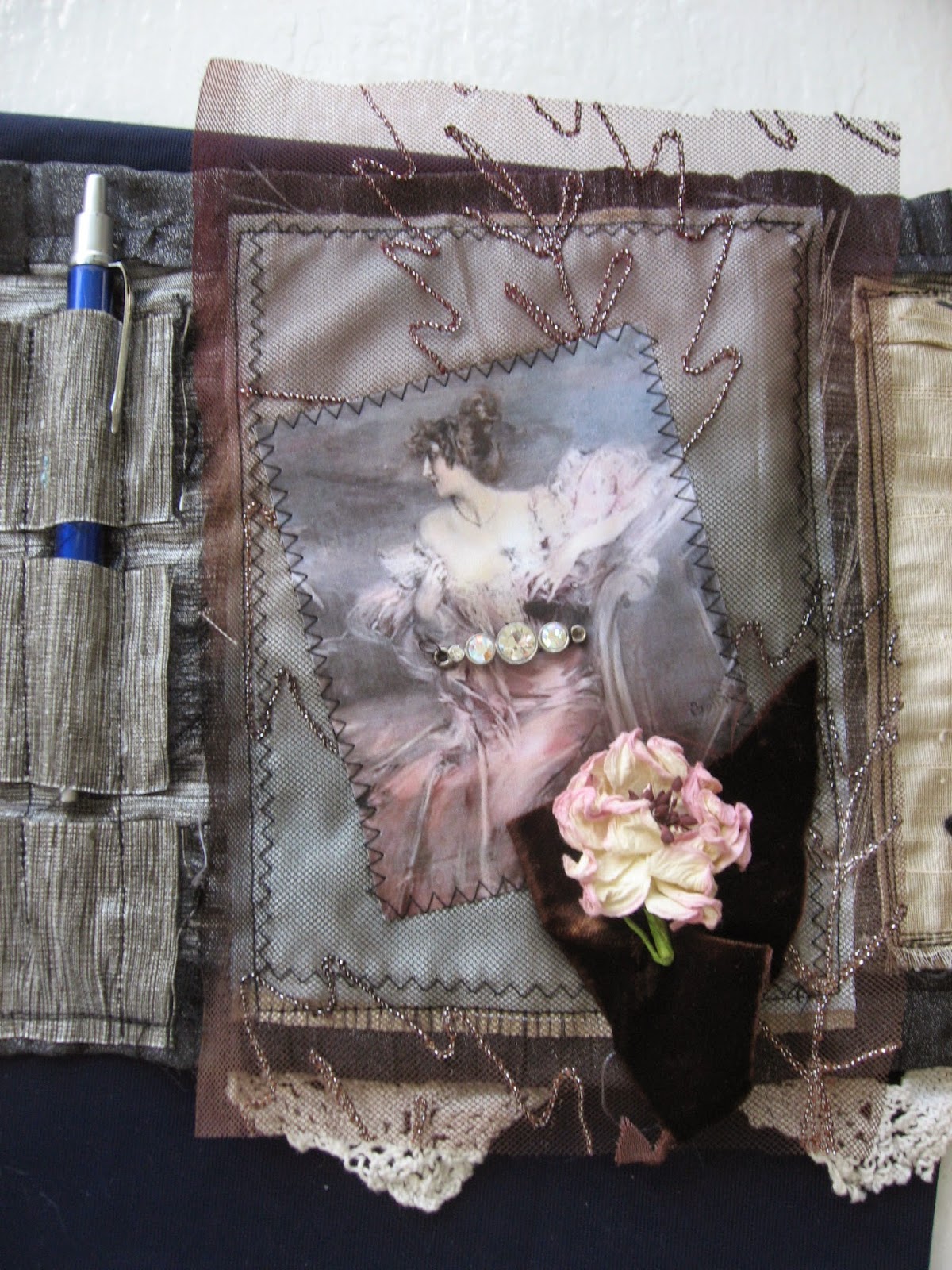 This is the middle section. 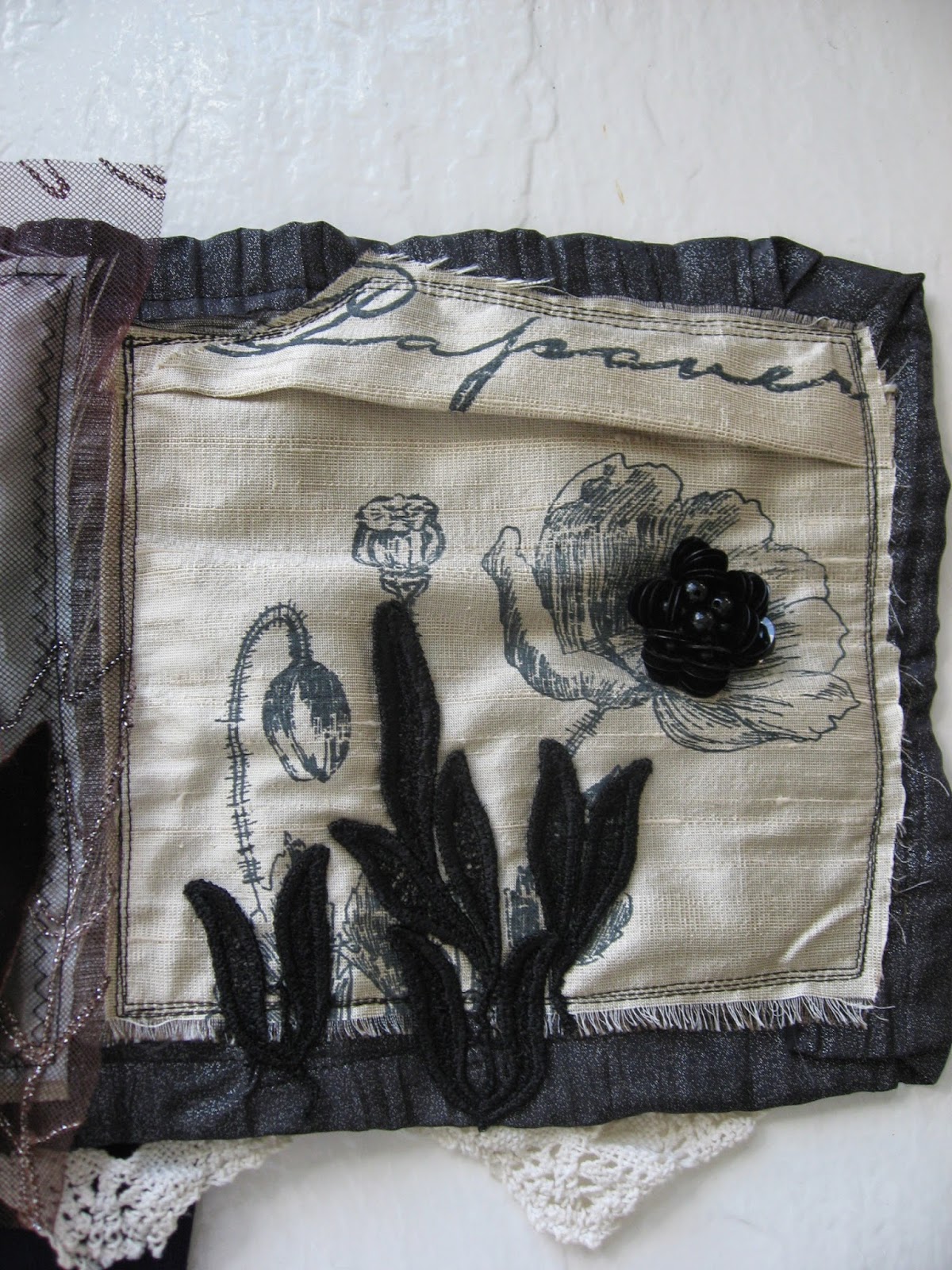 This is the right section.  Maybe too much black here? 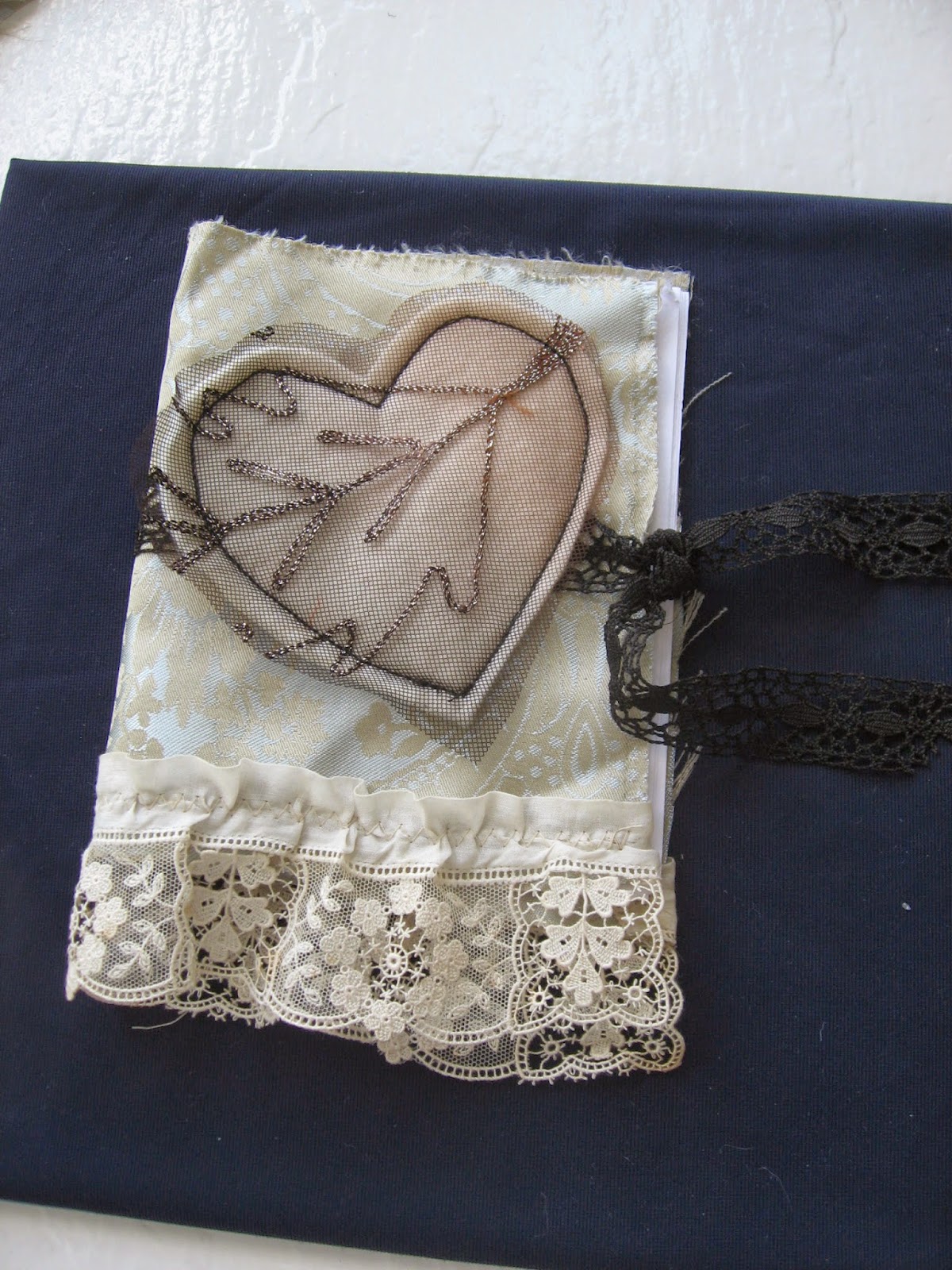 This is the first paper section.  Inside is a book of paper. It goes over the front and will be sewn down thru the middle of it on the left side. 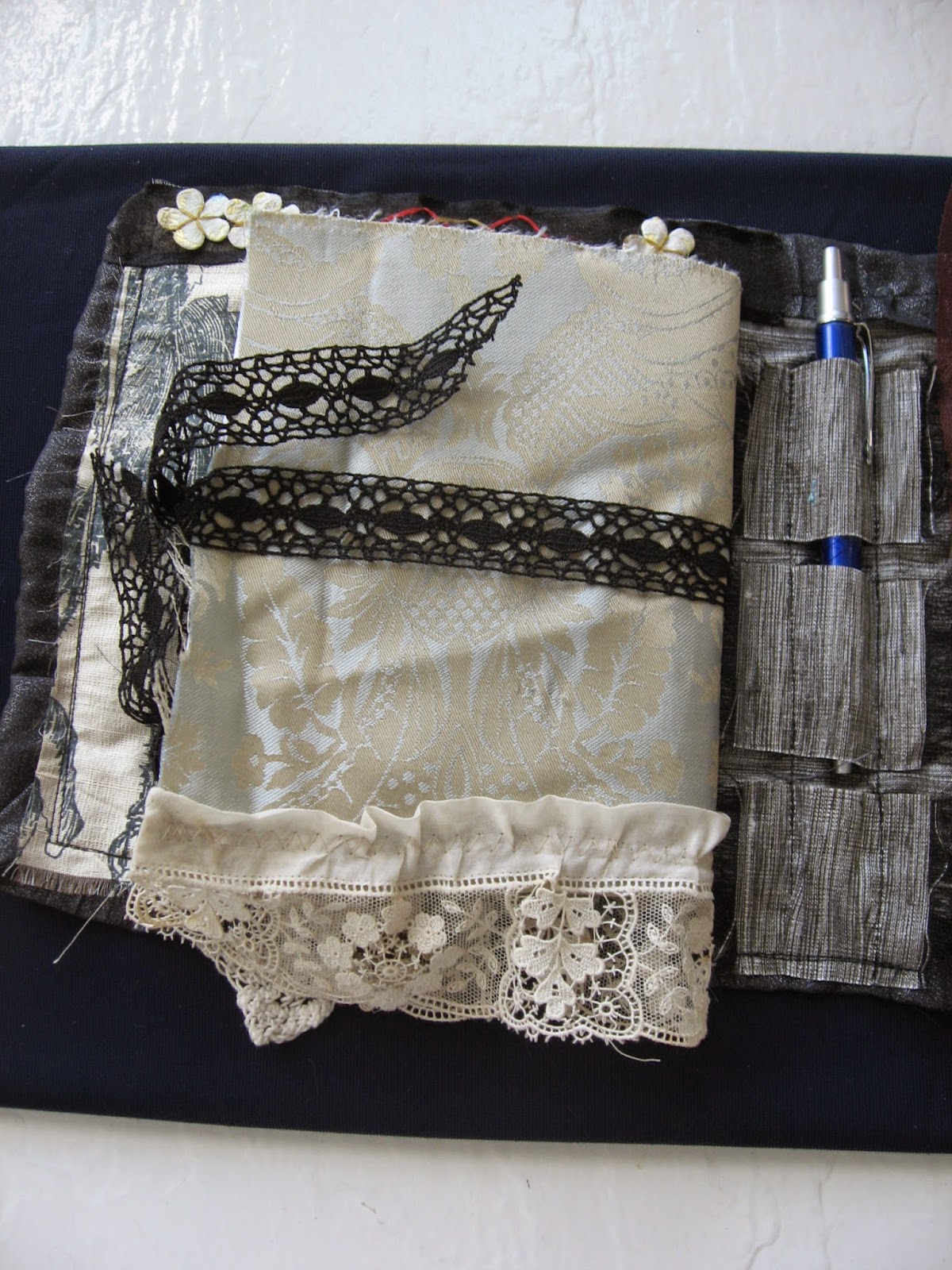 This is the back of it which will maybe give you a better idea of where it fits. 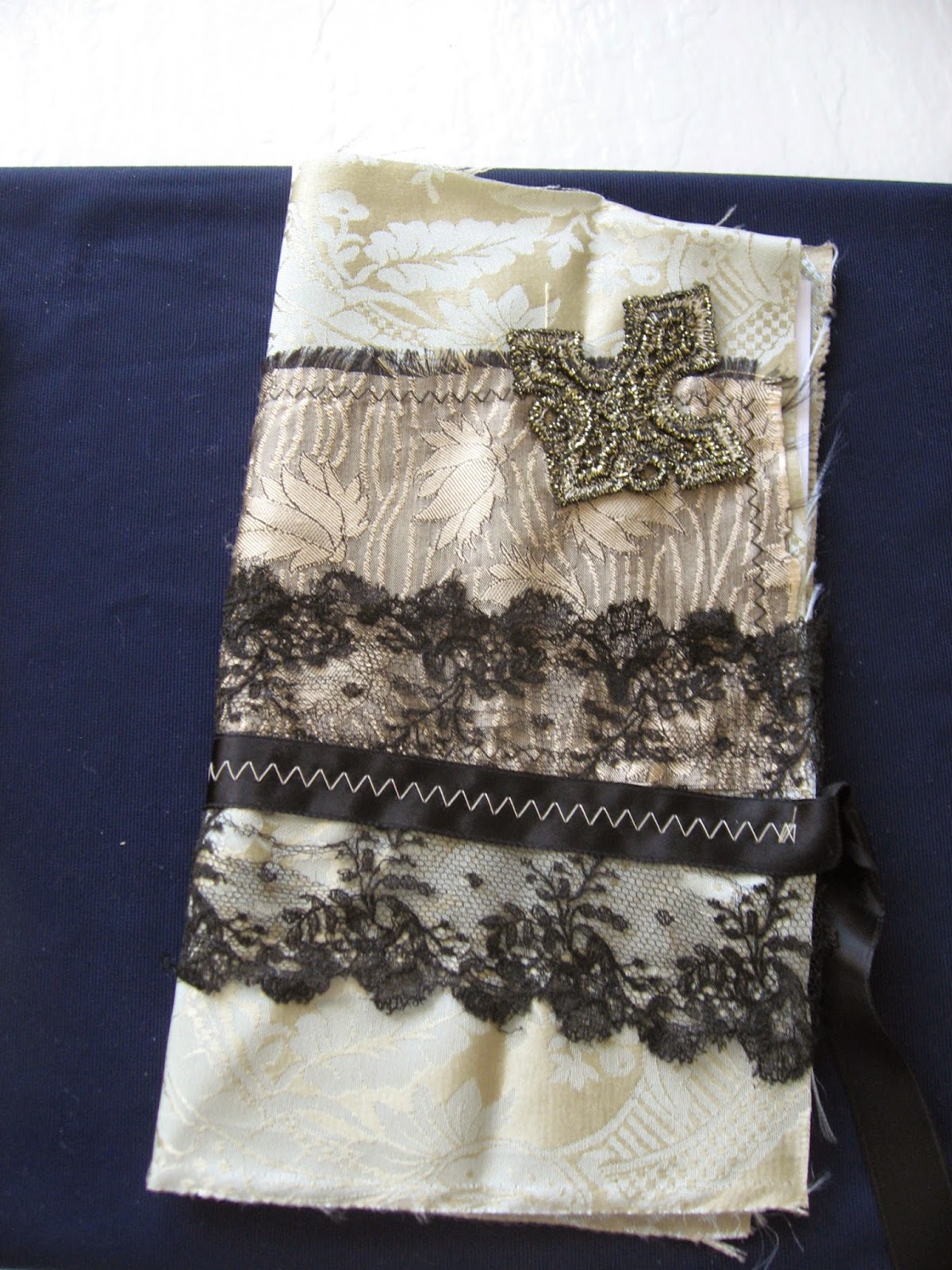 This is the paper section for the right hand side.  It can be plain writing paper or water colour paper. 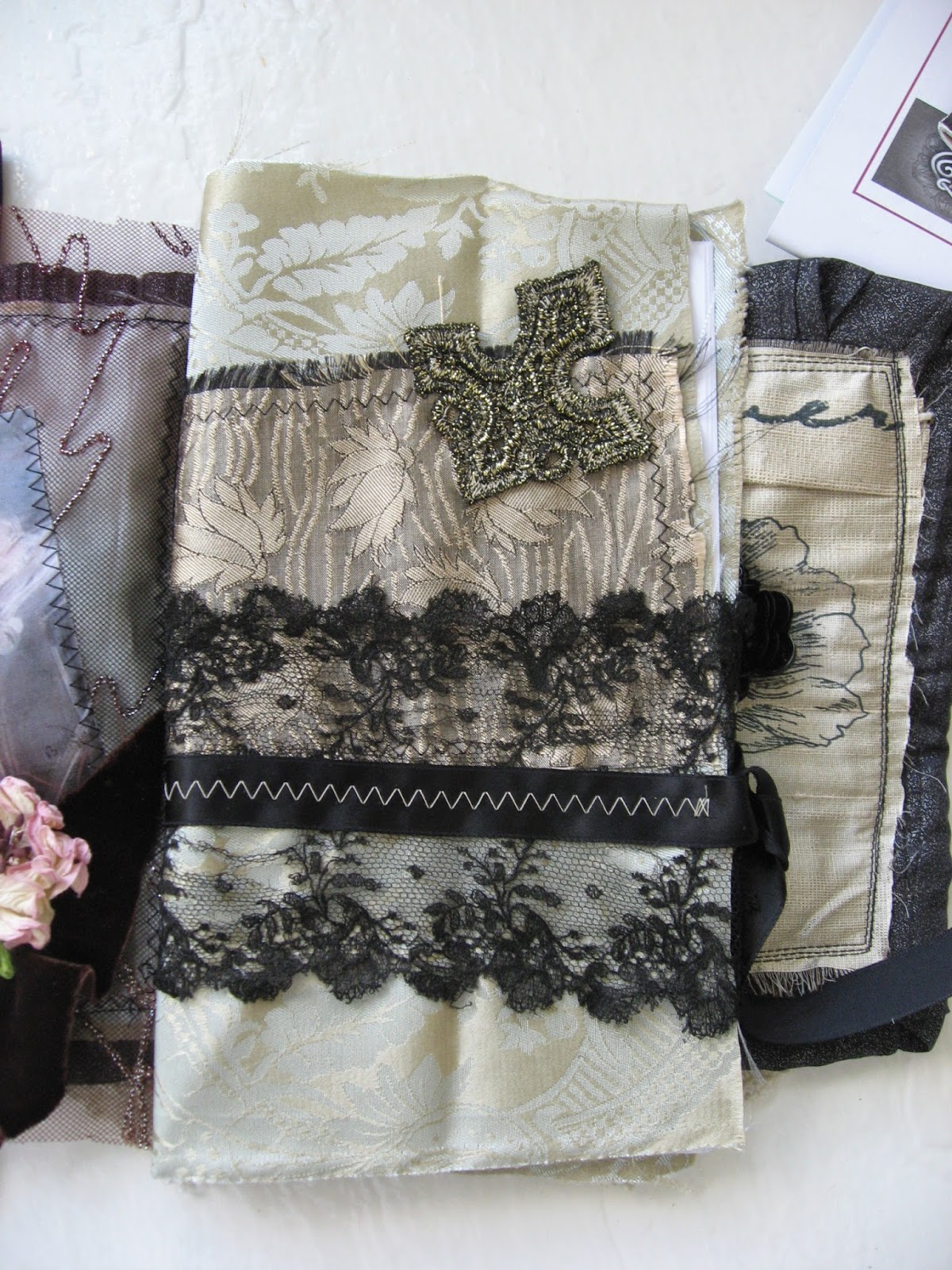 This was a double.  Should have been the back of it but I think you get the picture.

I took a class from Nellie Wortman on making a journal to keep paper and a pen in it.  At the same time Suzy Q had a blog about making this kind of journal. Between the two this is what I came up with.  It is picture heavy.

Thank you both Nellie and Suzy for your inspiration.
Posted by FredaB at 7:22 AM 4 comments:

I am again in a course with Karen Ruane called SS4.  This one is spread over 6 months and will be slower with fewer videos.  Mainly watching Karen s she creates which is a wonderful thing to watch.

She started making a swaddling band that was used for centuries to bind babies when they were born.
They did it to keep their limbs straight and strong.  People still wrap newborn babies but only to keep them feeling safe and warm.  When I see a mother out with a fairly new baby and they are only in a sunsuit, etc. I always have the feeling of wanting to rush over and say why don't you wrap the baby up in a soft blanket.  Different times, different ways I guess.

To get back to the bands she started making them in pieces and using old transfers on the silk to honor her grandmothers and others who always used these transfers on pillowcases, dresser scarves, etc.

She is also going to make some small ledger books to incorporate items along with this band.
I am showing the 1st. piece I have finished and a piece to go in a ledger.  It is on the cork board and was dam stretched.  This makes such a difference in the end piece.  This will have to be done in sections then pieces joined later.  This can be made as long as you wish.  When I run out of ideas I will have to stop. 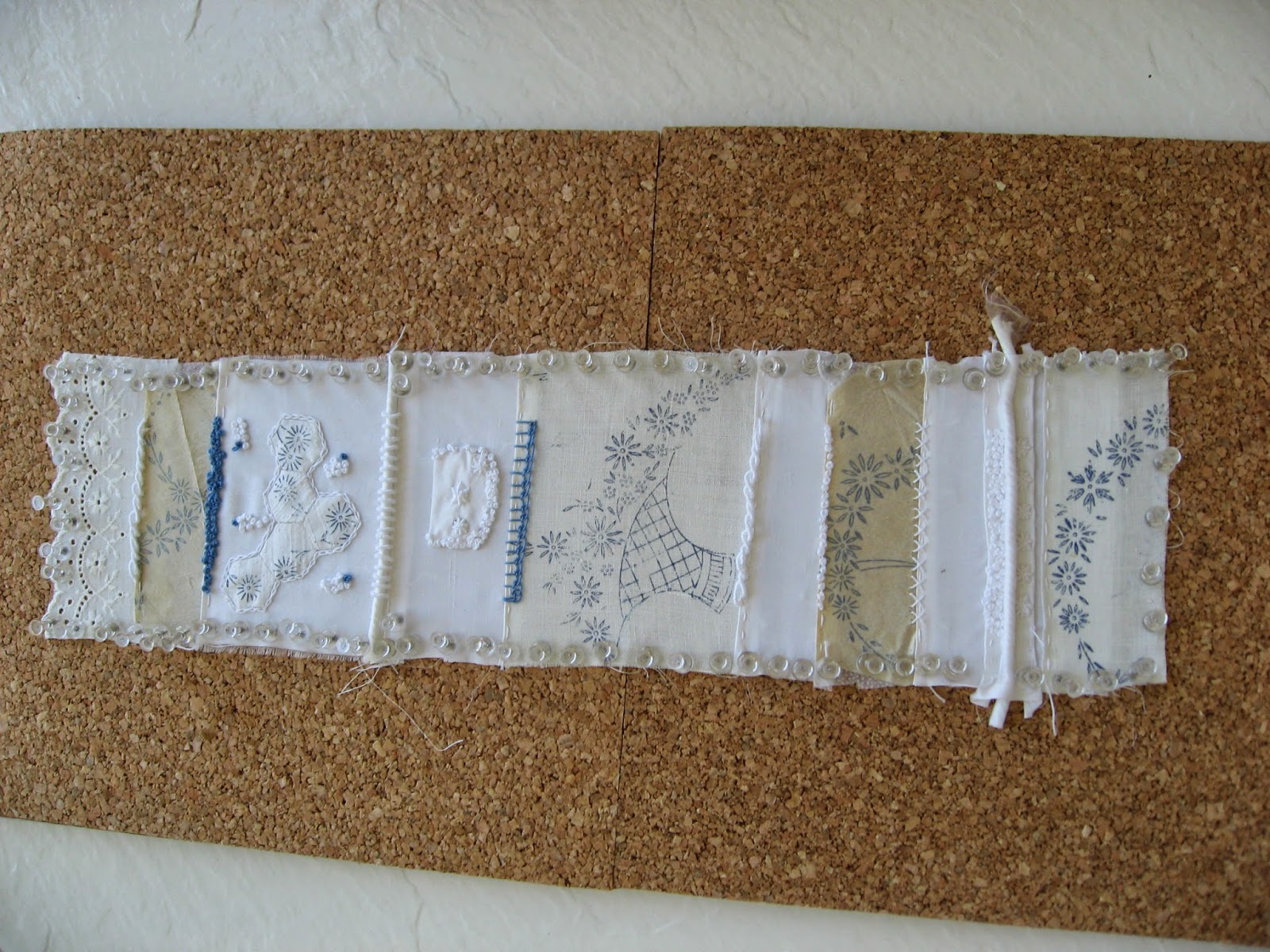 We also ironed on a light interfacing to the actual paper transfer we used to make it like a fabric.  The second from the top piece and the third from the bottom  piece are both paper. 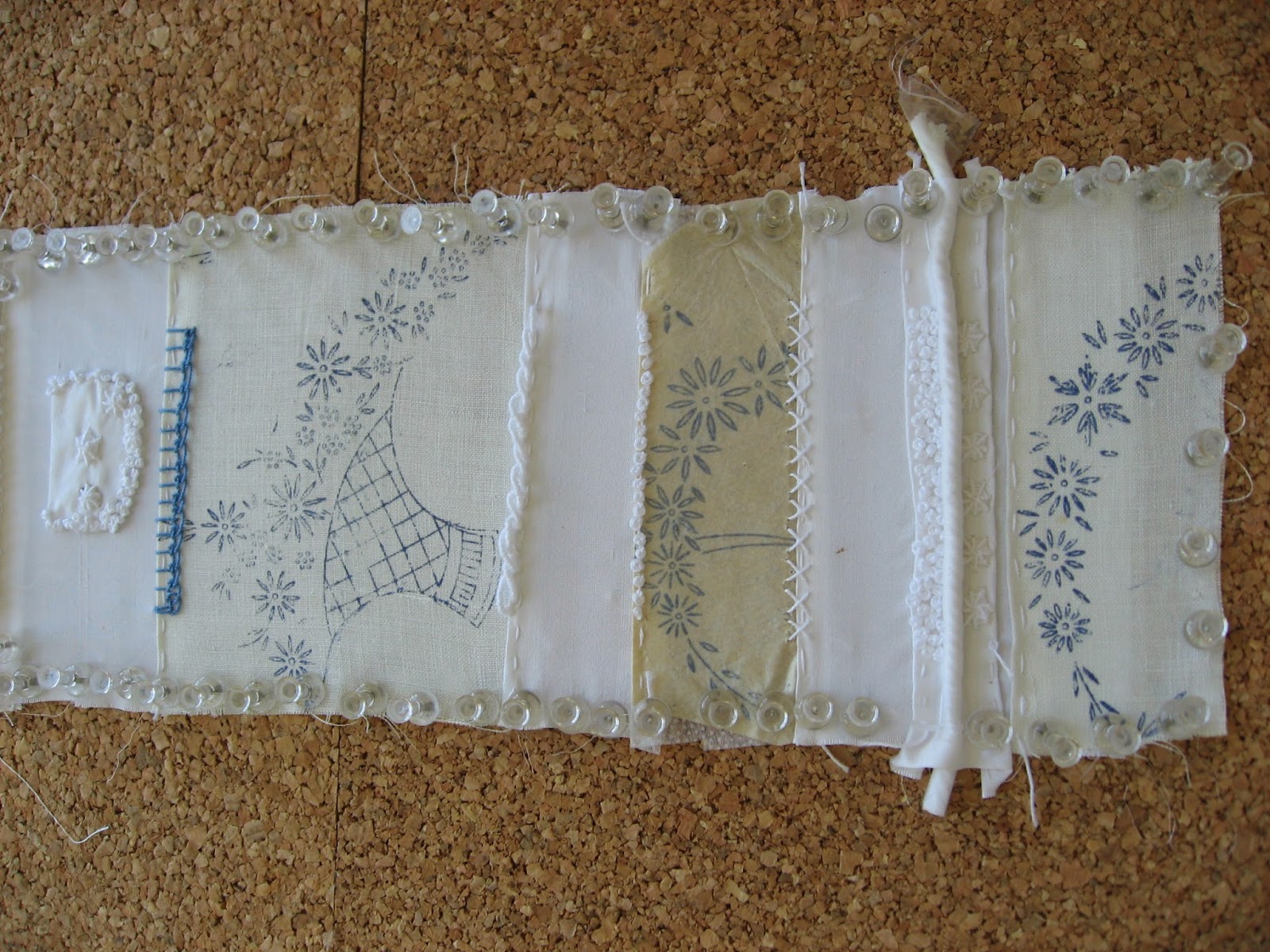 You can see the paper better in this and the following pic. 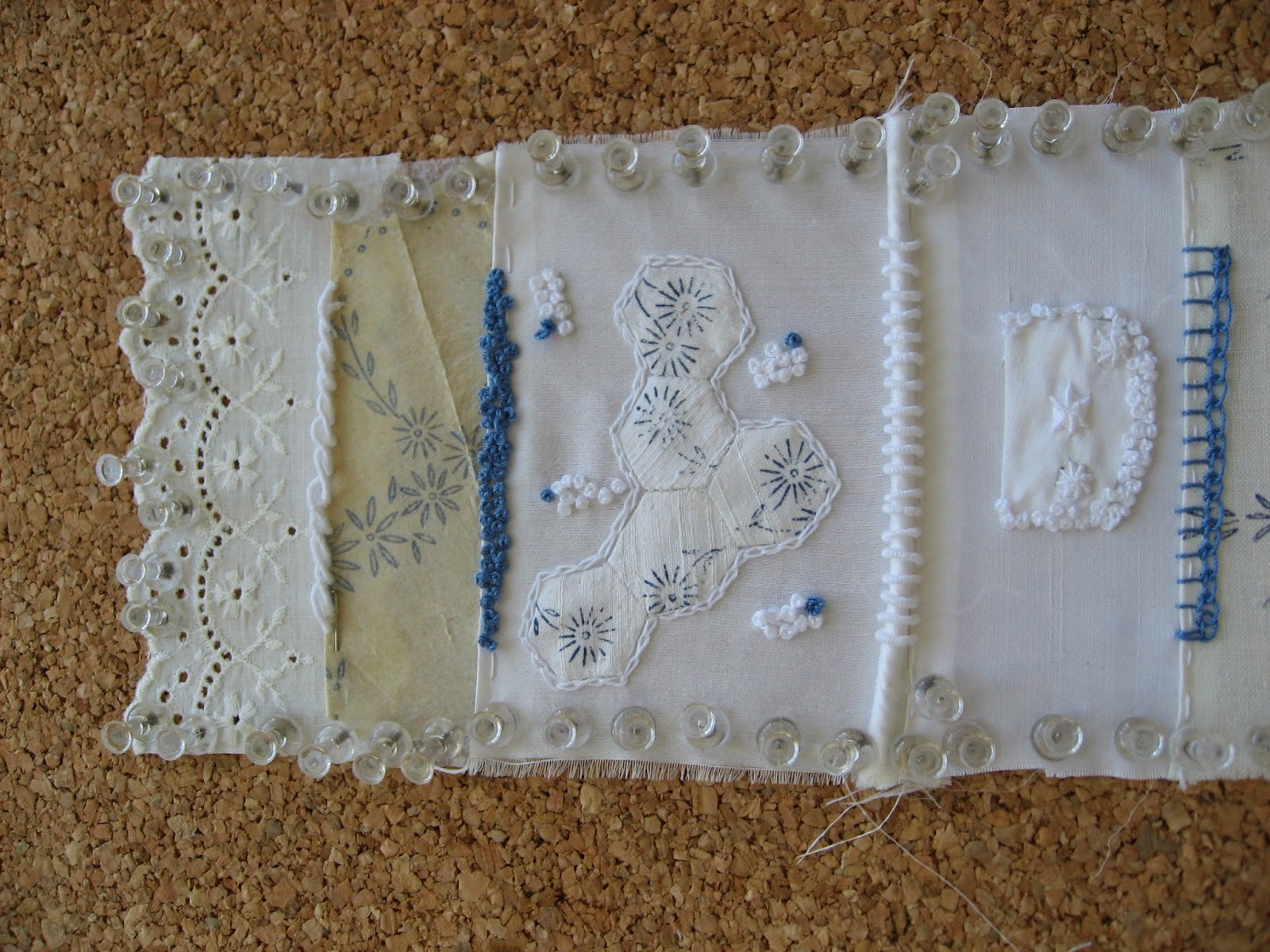 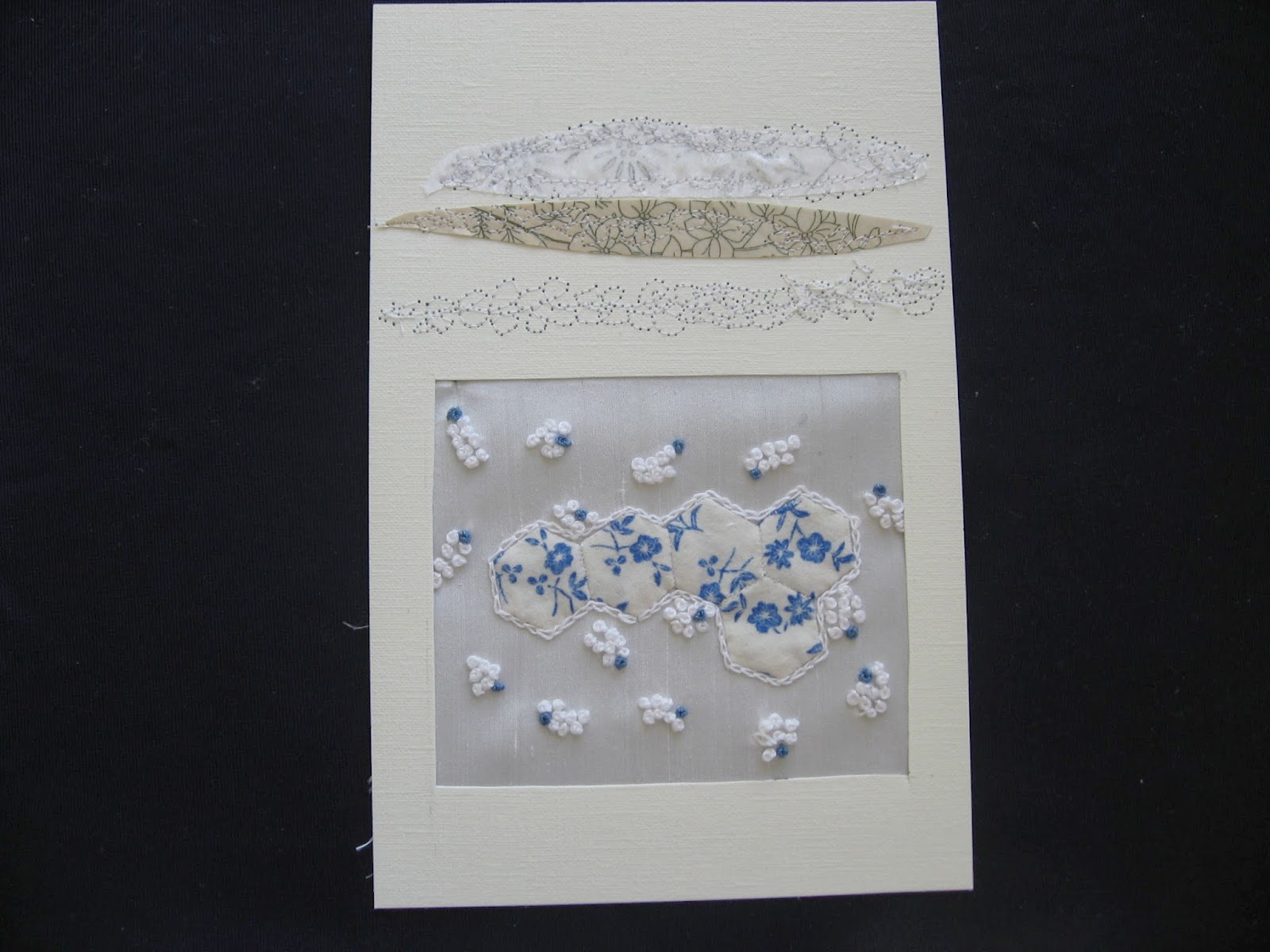 This is on watercolor paper with hexagons made with fabric that I transferred the images to plus french knots.

I am not sure how good this will show up but the top is FME lace fabric that I made, then an opening made for the transfer paper itself underneath and then some FME stitching on the watercolor paper itself.

I must say that the ideas above are not mine but Karen's.  I am putting some ideas of my own in the next piece that I am working on now.
Posted by FredaB at 11:15 AM 3 comments:

My daughter gave me a very lovely present.  It started with her 5th grader needing some answers to family geneology.  She had Harv's youngest sister send her some family info as she is the one in the family who has been doing it for years.  Well she sent much more then Sue asked for and that got her started.  I mentioned that I wished someone had done some on my Father's family as he came to Canada alone as a young man in 1925.  The rest of the family was still in Ireland.

Well Sue went to Registry.com, paid the monthly fee and has just blown me away with what she has been able to find out.  She found out tons of family info going back a few generations and also some interesting pictures.  My Grandmother Susan McAleish died in Ireland of influenza before my Father left Ireland.  I had never seen a picture of her until last Friday and Sue sent me this.  She also found pictures of 2 of his sisters and my Father's sailing certificate when he came to Canada which also told us what ship he arrived on.  We still have to find my Mothers  certificate who came in 1925 with her family.

Well wouldn't you know that blogger will not let me download her picture so you can see her.  Says it must be a picture or a file and cannot be downloaded. Since when can pictures not be downloaded?

Well all I can say is my daughter has made me very happy and when we get home this summer we will continue on with records that I have at home.  I will have to see if Harv. can figure this out and then I will print it.
Posted by FredaB at 2:41 PM 8 comments:

Last Saturday our local library held a Downton Abbey tea party.  You were invited to come dressed up if you cared to and if not come as you are.  Tickets were $5.00 each and 2 neighbours and I decided to attend.

I did not have any clothes that fit the occasion except this old silk blouse and a long black skirt.  the blouse was down here for me to cut-up for Crazy Quilting and I had forgotten it in the back of the cupboard.

The gal that ran it has a group called Ladies Tea Adventure and she did a nice job.  We had a wonderful tea from England called The Prince of Wales and crepes suzettes were served as the dessert.
They meet once a month at various places and tea rooms and always wear hats,etc.

I only took a couple of pics then my camera battery ran out.  You never think of it until it does. 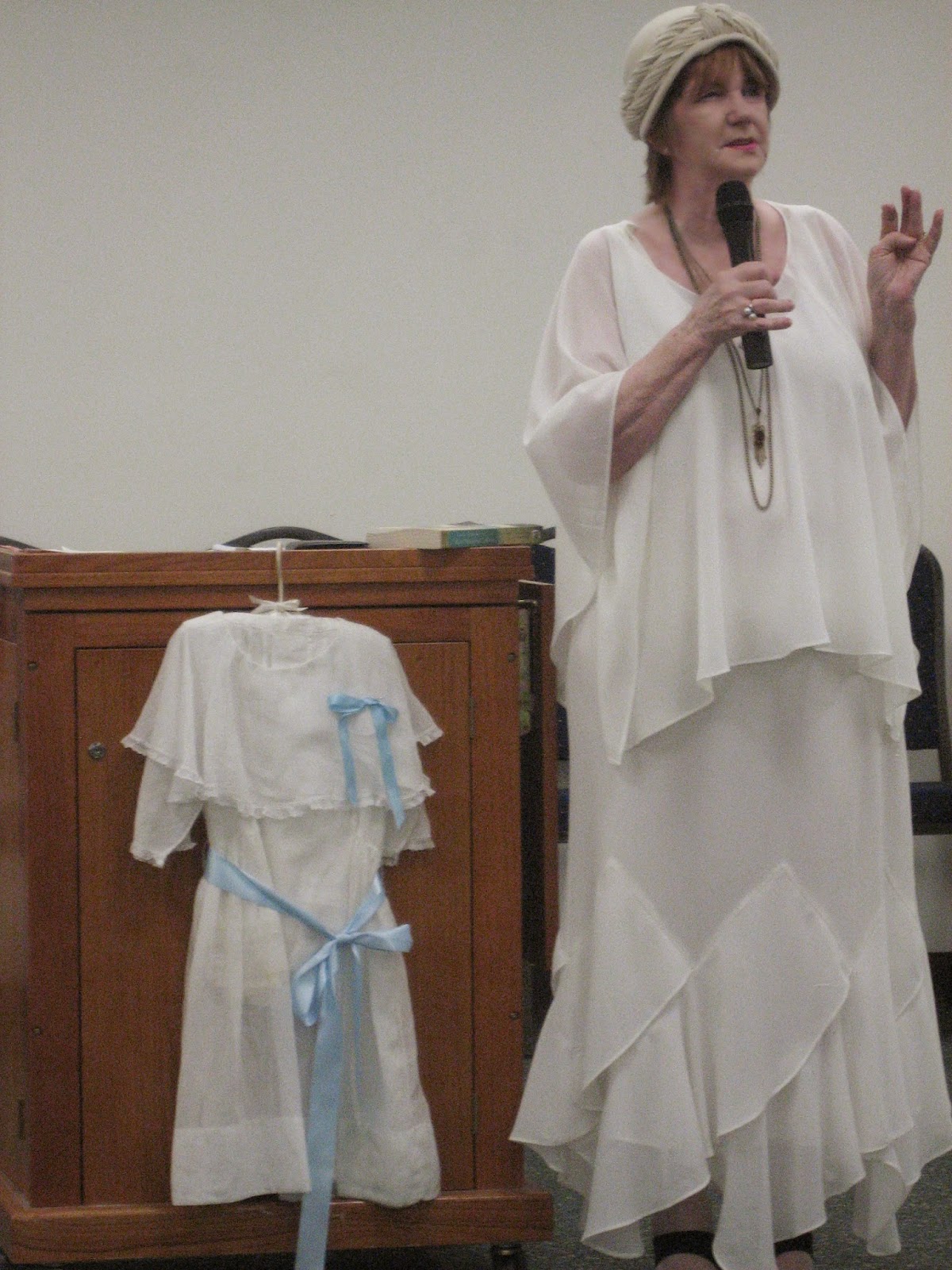 This is the gal that ran the afternoon tea.  A beautiful child's dress can also be seen.  I was going to take a closeup but the camera was gone. 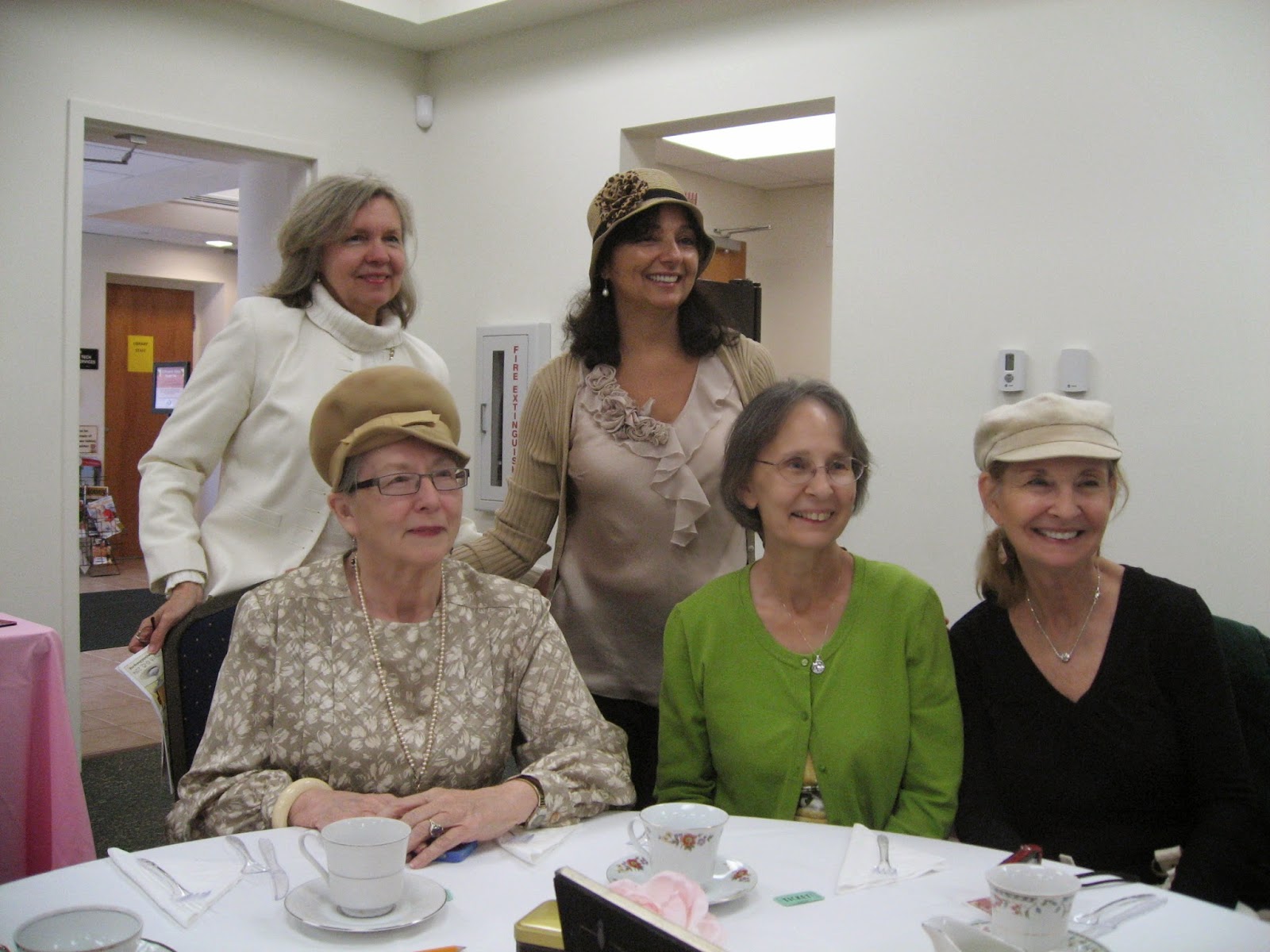 This is the group we sat with. Some dressed up some not.  I think the ladies who dressed up belong to this club and hence have hats and outfits to wear. 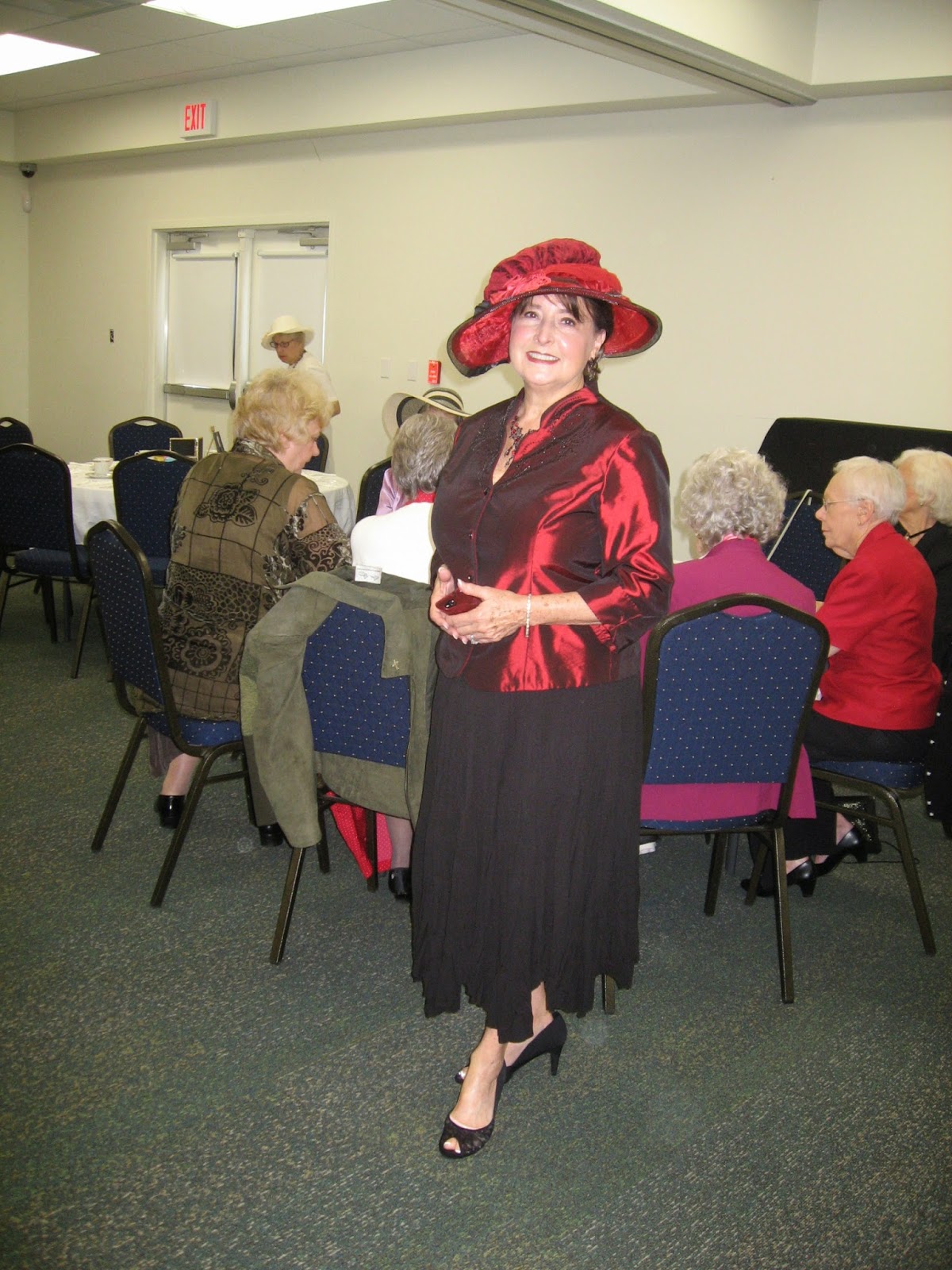 This is also a neighbour of mine who did not come with us but is one of the ladies group.  She had her hat made special for this occasion.  She looks very glamorous. 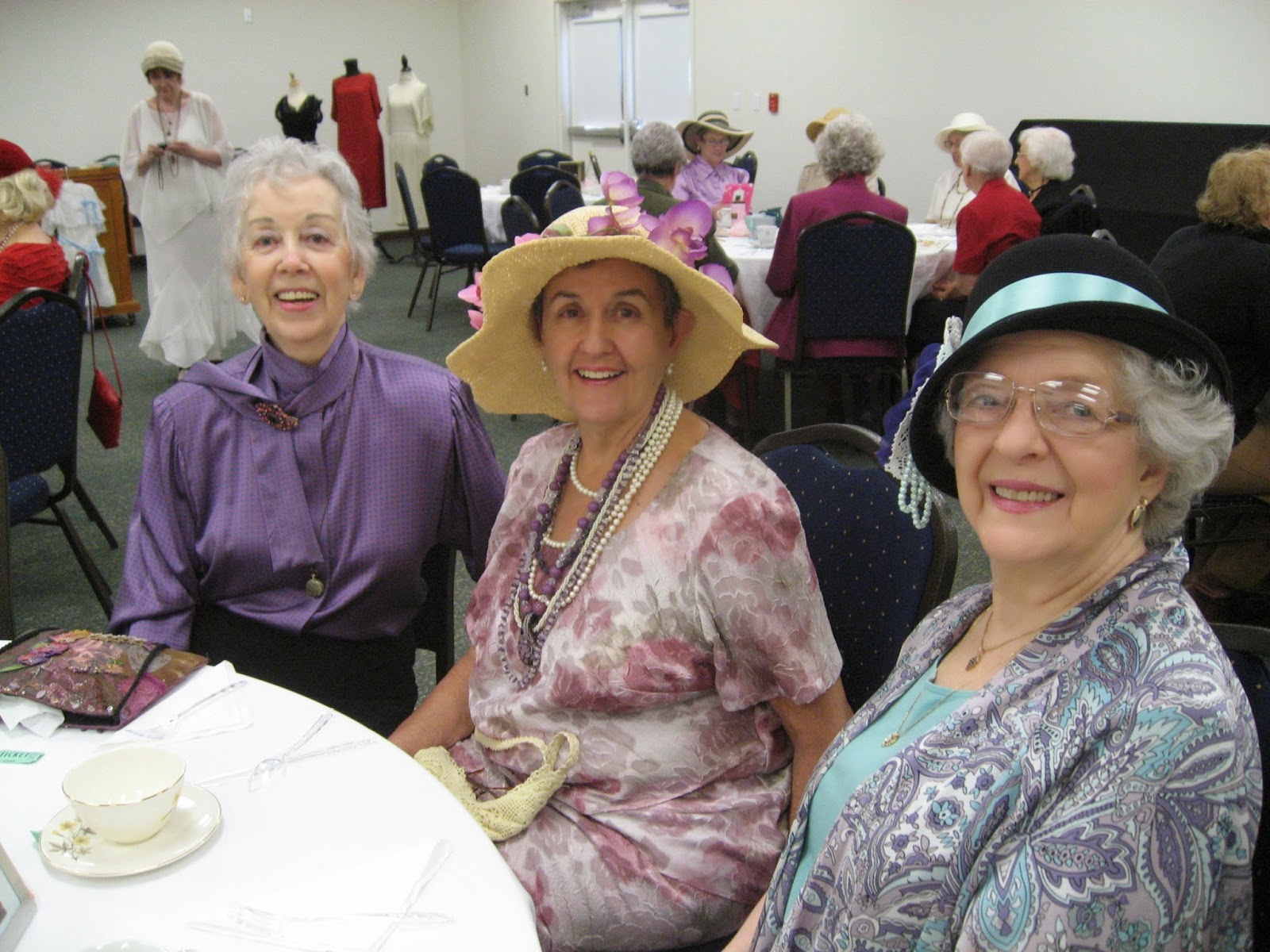 This is me in my purple blouse (no hat) and my neighbour in the middle.  The 3 rd. gal could not make it.  The lady in the turquois came by herself and sat with us and we both enjoyed her company.  She is also a snow bird and is from Ohio.

They played 2 games with the first being "Quotes of Characters from DA".  Half were made by Maggie Smith which you can imagine as that is what she is famous for in this role. There were 25 questions in this one.

The 2nd was "A Downton Abbey Quiz".  there were 30 various questions in this one and even though I haven't missed an episode I couldn't remember almost half.  Very obscure questions.

There were prizes and the grand prize was a beautiful tea pot and it was won by the gal in the hat above.

I do have copies of both of these so if anyone wants them for a party, etc. just let me know and I can send them to you.
Posted by FredaB at 4:56 PM 9 comments:

You will enjoy this one Kim (family).

My one and only grandaughter had her 19th birthday Feb. 20.  If you remember I made her a journal of pictures from when she was little and used to come visit and spend weekends.  We used to read a lot and her favorite books were written by an author named Kevin Henkes.  Well this year I happened to see an ad for his books in the book section of the paper and it took me back quite a few years.

I went on line and ordered quite a few of her favorites from our library system and when they arrived I thought I would make her a card with photos and words from some of her favorites.  Her all time favorite was Lily and her Purple Plastic Purse given to Lily by her grandmother and filled with shiny bright quarters.

Here is the accordian type card I made for her. 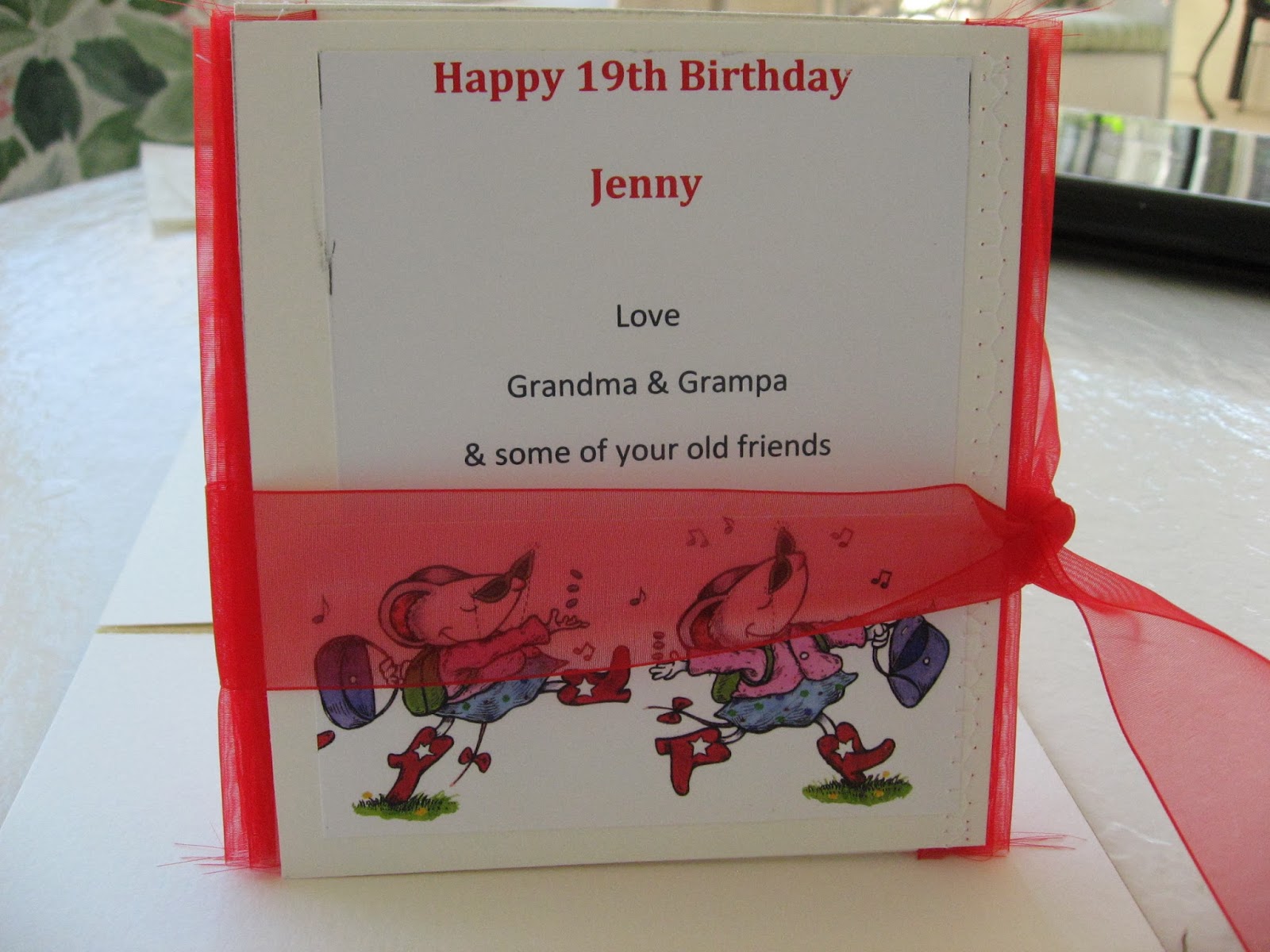 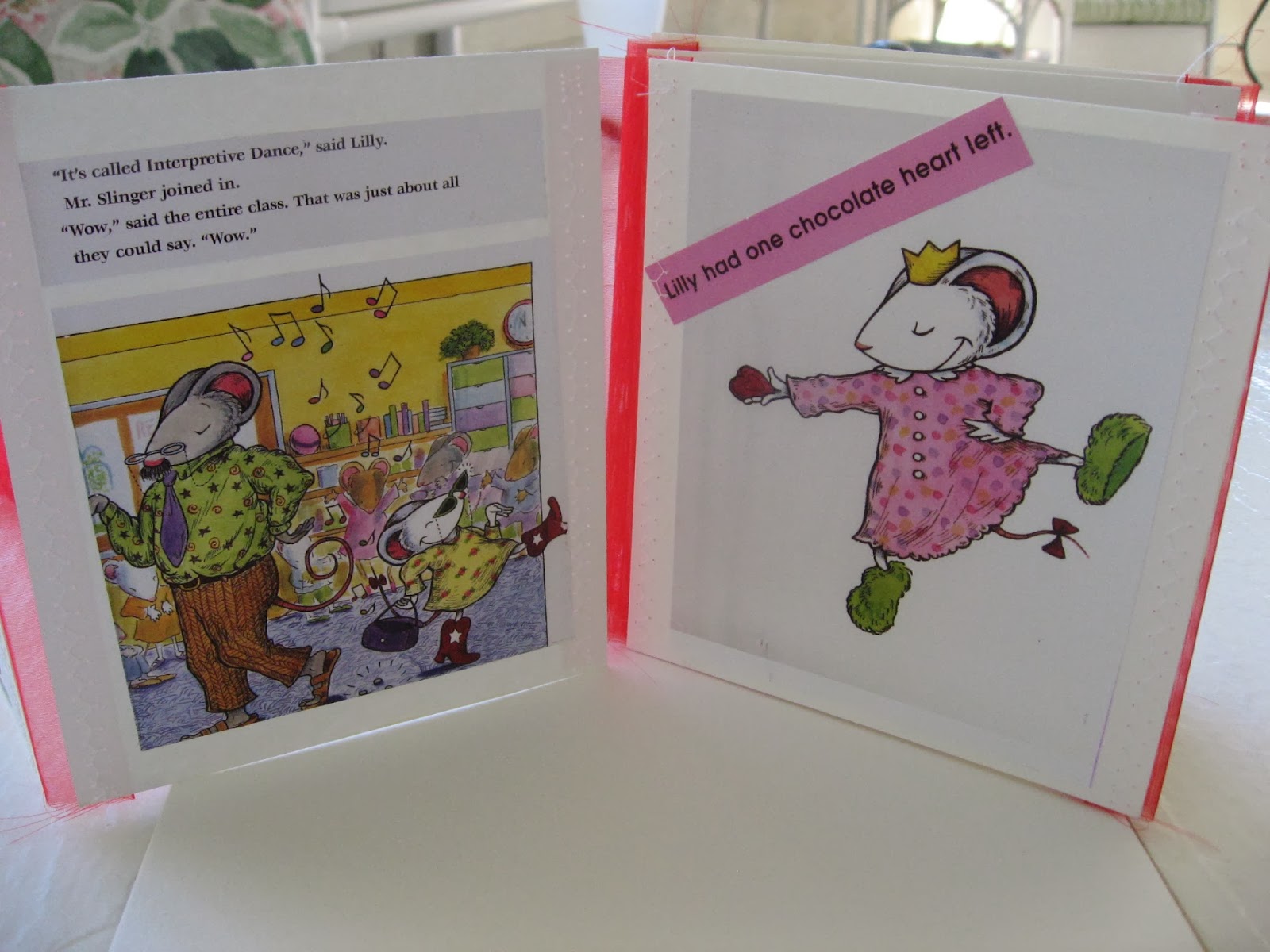 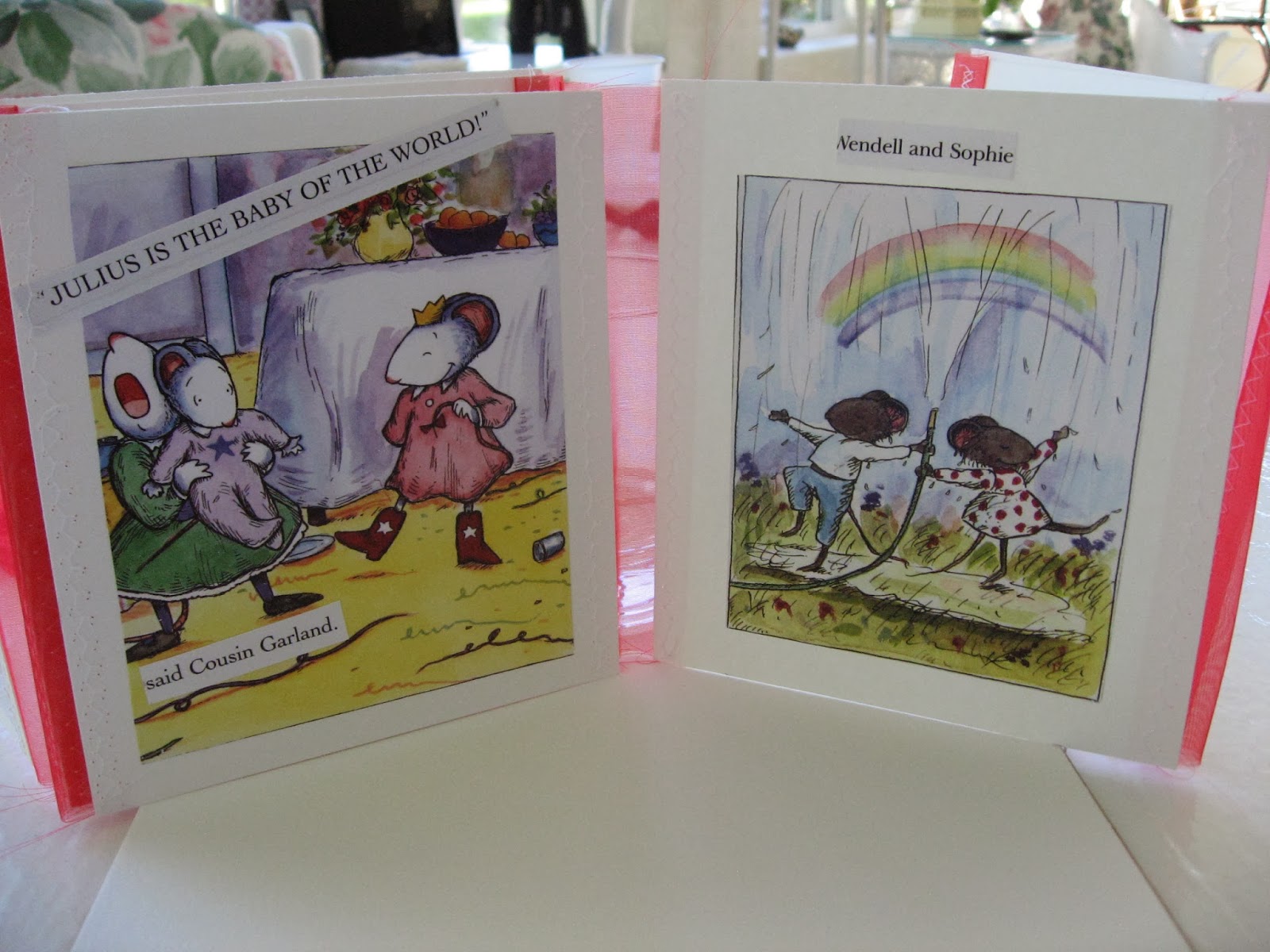 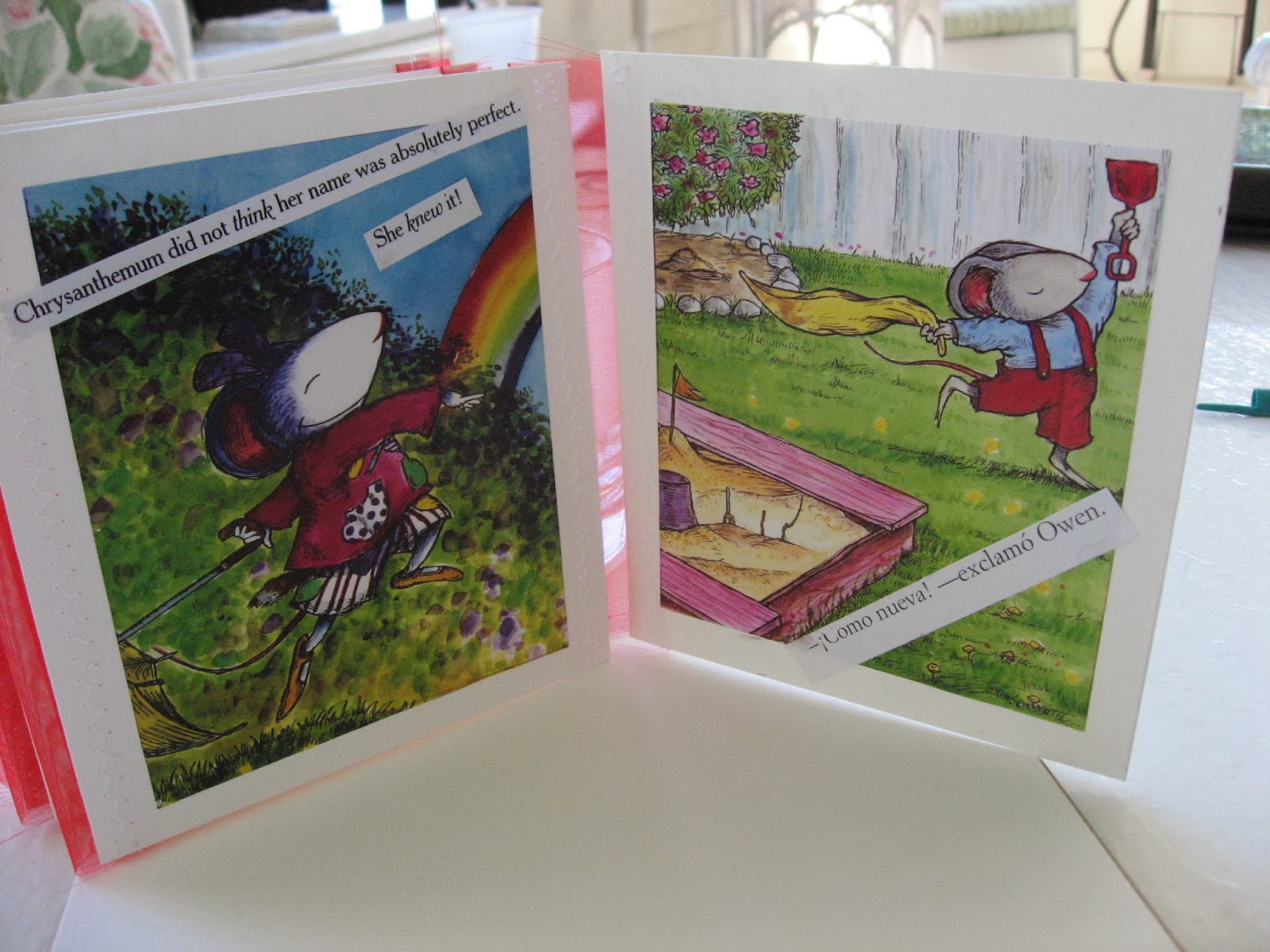 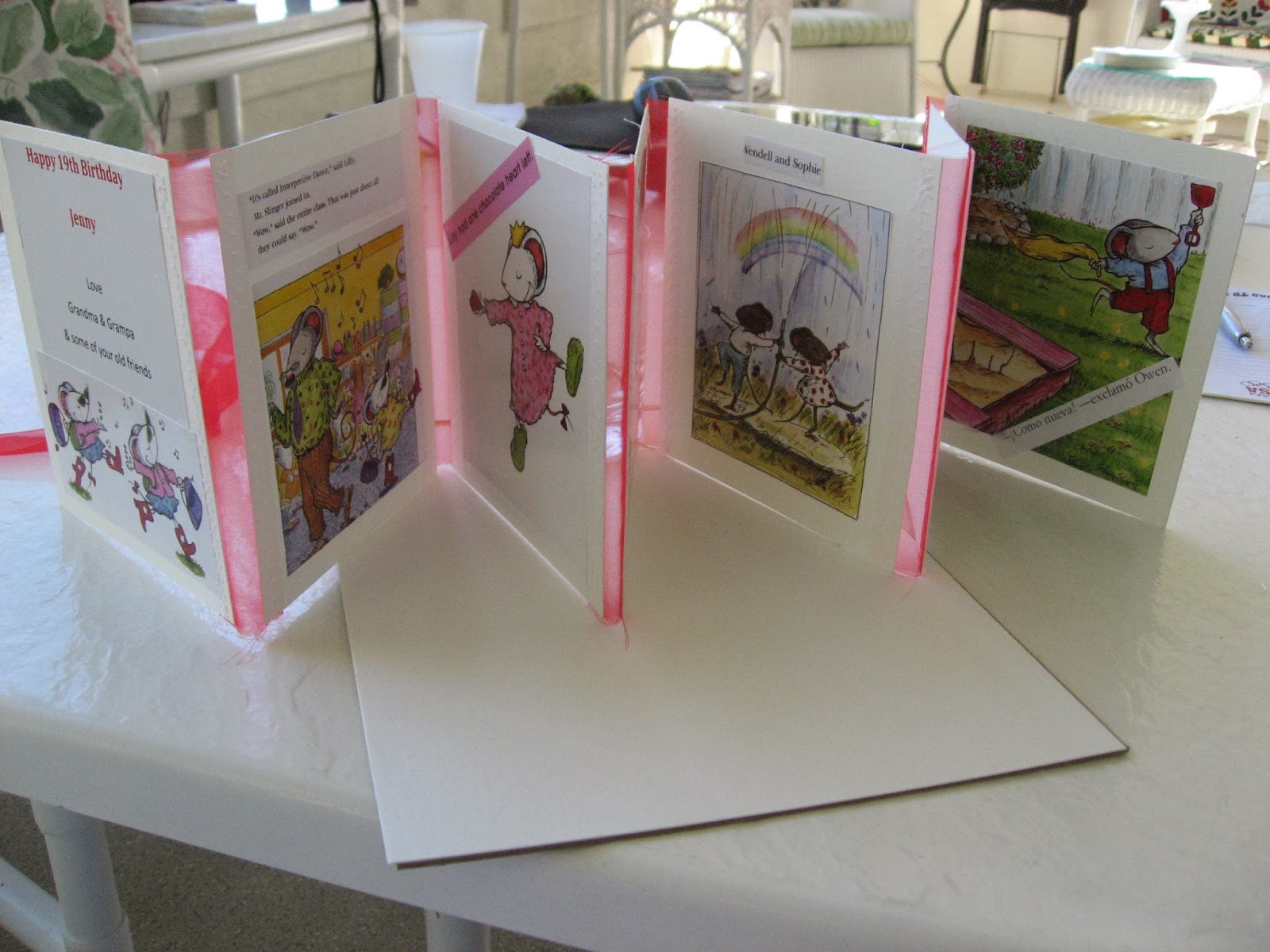 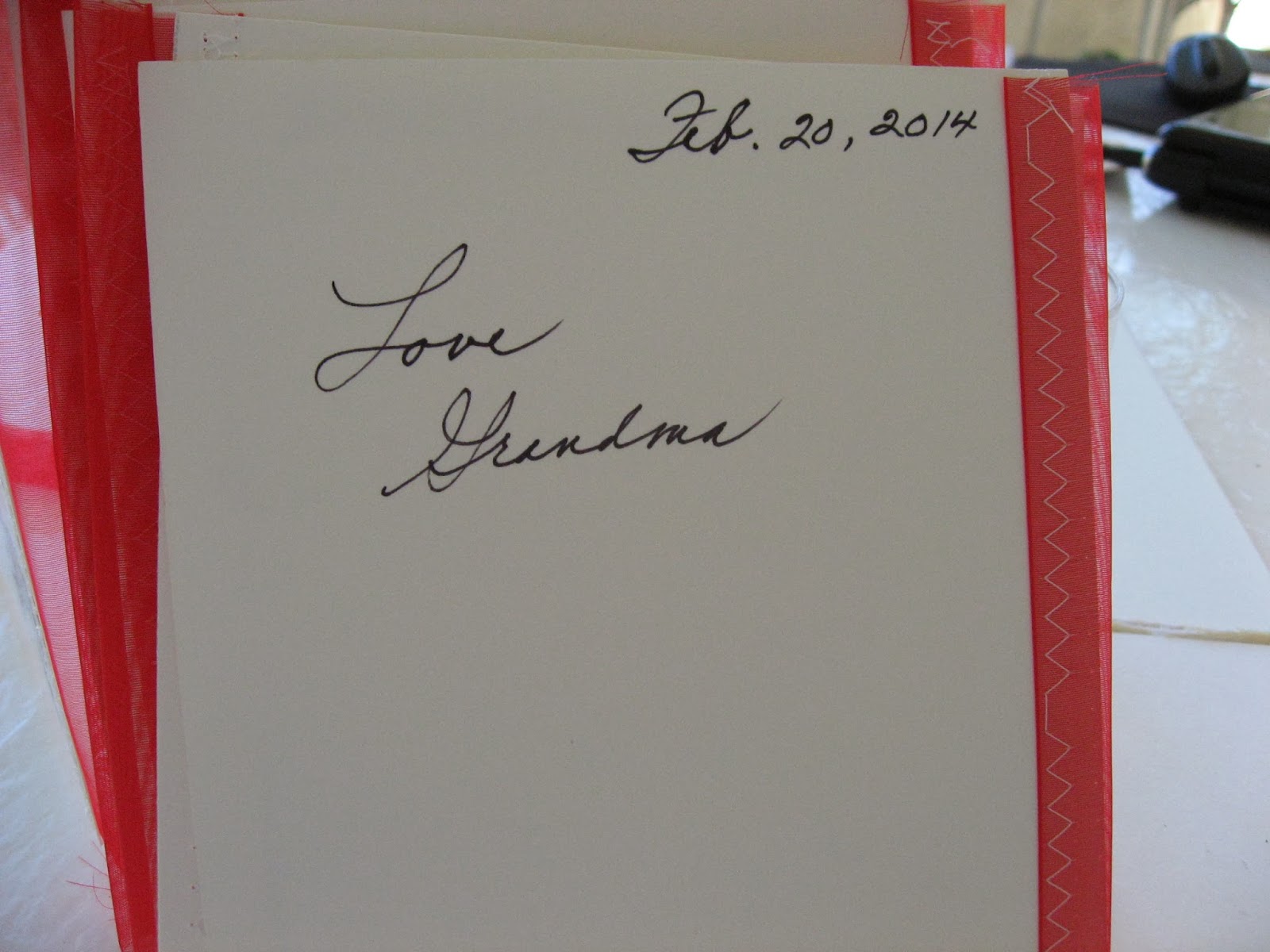