I spent June 20 to the 23rd. at the Crazy Quilt Retreat in O'Fallon, IL which is about 300 miles south of Chicago right across from St. Louis. It is all due to the work of Mary Anne Griffin that we have continued on after the Omaha retreat fell apart. This is the third year for it and it gets better with time. I went in 2010 and then could not attend last year but was back again this year. There was a large contingent from Kansas City plus a lot of our old regulars like Mona from MN with 2 of her MN group, our dear Kate from Il.,Lydia Talbot from Cedar Rapids, Iowa and her SIS from CA. Karen South came with a friend from Louisville, Martha Green and Donna Johnson drove together from OK. Yvvone Streeter from Dallas and Lisa Caryl from Iowa were there. Also quite a few others whose names I cannot remember. Mary Anne had arranged for a large meeting room and there was plenty of room for those who bought their machines to sew and lots of tables for those who wanted to sell stuff. I had done a partial clean out before I came so bought a lot of stuff down and sold a lot. I  could have a retreat and sell every week and not get through all I have collected over the years. A lot is going to Goodwill once I have been through everything. 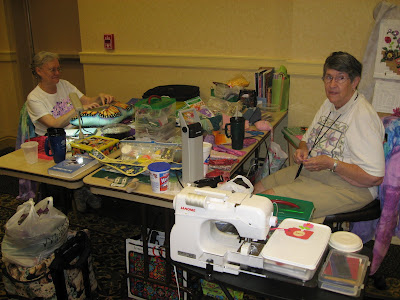 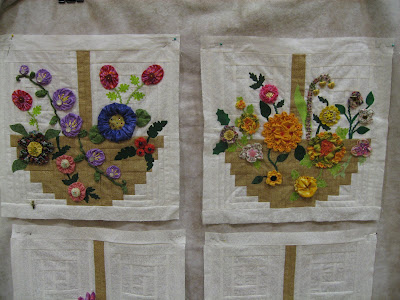 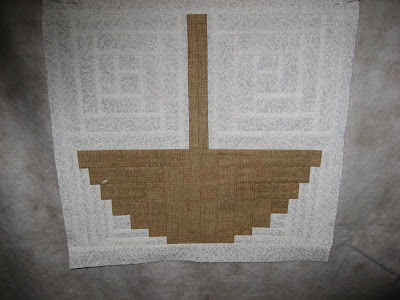 I did not get the names of the two ladies in the above picture but they both were doing some beautiful work.
The lady on the right was making a wall hanging with the basket being made in the log cabin style.  The flowers were all made with the Kumihoma flower makers.  I was very impressed with them and I must buy myself one or two to try them. 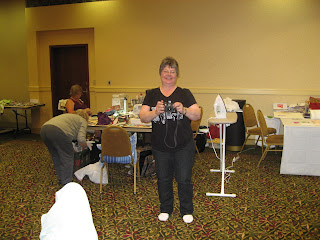 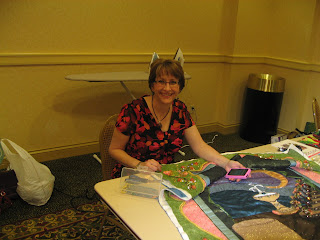 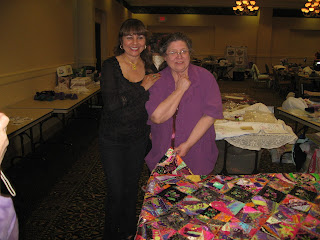 Mona was taking a picture of me as I was taking one of her. Next is MaryAnne who  made all this possible.
Here is a pic of Lydia Talbot and Martha Green.
Lydia had brought her wonderful CQ king sized bedspread for the girls to see that Martha Green made for her and gave it to her in Omaha a few years back.  I had seen it then but it was just as wonderful looking at it for the second time.  I don't know how Martha handled all that fabric.
Lydia's birthday happened to fall on the Friday and her husband and SIL arranged for a wonderful cake that we all shared..

Will be back tomorrow with more pics.  I have to give thanks to Bonnie Dudley from Iowa who took the time to show me how to post pictures on the new blogger.  Thank you so much Bonnie.  Now I can actually put text under the pictures.
Posted by FredaB at 3:23 PM 7 comments: