Yesterday was a beautiful day here, mid 70's, no wind, and Harv decided to go fishing. He goes to the next town usually that has a wonderful lake walk with guard rails that he can fish from.  He enjoys the fishing and the chatting with other people he meets there.

He caught this beauty of a bass and gave it to a young man who said it would be his supper.  Harv fishes just for the pleasure of it and usually throws them back.  This one was too large just to do that and the young fella was very happy to get it. 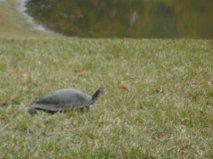 We also had a big visitor who came out of the pond behind our house this afternoon.  Last year we watched one come up from the pond, start digging in the sand and laid her eggs. She covered them up and then went back in the pond.  We noticed a lot of large birds circling and probably watching for her to finish covering them up and then they would swoop down and eat them.  I fooled them by laying a small piece of plywood over that spot and left it for a day or two and they never came back to bother it.  We did not see the eggs develop but am sure there are some small turtles in the pond from that.  Maybe this is the same large female turtle.
Posted by FredaB at 3:19 PM 4 comments: 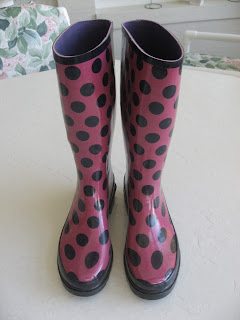 My solution to the snake dilemma.  I was at Belks with a friend and spied these boots on sale and
thought they would be good for the garden.  Stomp those suckers down.  Long as they don't rear up and bite me in the butt.
thought that is what I need for the garden.
Posted by FredaB at 4:01 PM 2 comments:

Happy Thanksgiving to all my American friends & family. We are celebrating here today with my son David and his wife Kim who arrived last Sunday from Minneapolis.  The weather has been high 60's - low 70's even though all last week they called for mid to high 70's all week.  They are leaving tomorrow and the high for Minn. is only 28 Friday so this to them has seemed very good.  they have been taking long walks and went to downtown Mt. Dora yesterday to stroll the stores.

Monday we all went to see the Movie Lincoln.  It was very good even though it was 2 1/2 hours long.
It went by very fast and did not seem to be that long.  My only thought was I wish we had seen more of Sally Field in it.  Daniel Day Lewis was exceptional as usual.  No one else could have played the part as he did.  You felt as if you were actually watching Lincoln.  I highly recommend it.  We very rarely go to the movies but this was a winner. 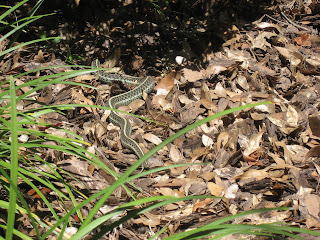 The bit today is my friend I almost stepped on in the front garden bed of the house.  Luckily I happened to look down and saw him before my foot landed on him.  I ran and got the camera as I like to know what kind of snake it is  as there are 3-4 poisonous snakes in Florida.  this Harv looked up and was just a garden snake - but a good size one.  I did find a solution for me in the garden which I will take a picture of and show you next time.
Posted by FredaB at 8:44 AM 1 comment: 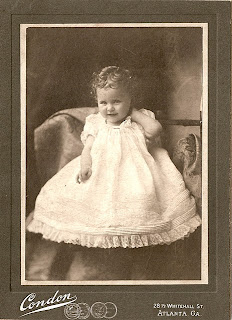 This beautiful baby needs one of my bonnets.  I receiv ed an email from one of my Quester Grandmas that I was hoping would get my baby bonnet at the auction.  Well she did get it but had to pay $65.00 for it. Apparently there were a lot of people with little baby girls there as there were quite a few bidding on it.  She did not mention the blanket so will have to email someone and see what price it bought.  People at the auction tend to pay more then normal for items as it goes back to our community in many ways.  I felt good about this.  Maybe I should do another one next year.
I am getting ready to unpack my sewing room stuff today and have to put most of it away as my son and DIL from Minneapolis are arriving Sunday for thanksgiving.  This is my guest room also as I have a Murphy queen size bed in the wall in here.  Weather is great right now and hope it stays for all the visitors.  November is one of the prettiest months down here.  Well must go clean this room up.﻿ 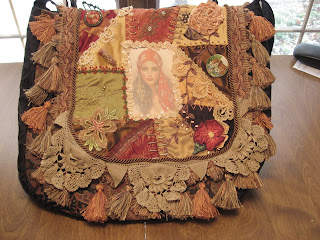 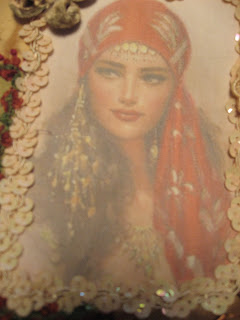 We arrived safely in Mt. Dora sunday about 6 pm.  Good drive except for about 3-4 hours of rain thru IL & IN.  Cleared up when we got near Kentucky and was a good trip the rest of the way.  One little glitch was we arrived about 7 Sat. night and when I checked into The Country Inn & Suites we had reservations for she handed me the key card and said room 301.  My mind went click and I asked her was it a handicapped room as requested and she said it was.  I thought it was strange on the 3rd. floor but she said we have an elevator so they are on all 3 floors.  Coming back from Toronto in Oct. we had stayed at a CI&S in MI and they had put us on the second floor and it worked out so I thought you will be okay here.  Well it was all well until I went to go to the car Sun. morning while Harv was getting ready and there was a sign on the elevator door - OUT OF ORDER - I ran down 3 flights and asked did they have a freigt elevator and he said no only the one.  Before I hyperventilated before his eyes he informed me the service man had been called and should be there soon.  I had to go up 3 flights and inform Harv we might be there for awhile.  We decided the best thing was I would bring up breakfast and that would kill some time.  Down 3 flights I go again and carry a tray with breakfast up 3.  After breakfast I was down there again and he said the repairman had just pulled in.  Well he did repair it and we were delayed about an hour longer then we would have been otherwise.

The lesson learned here is to ask not only for a handicapped room and is it on the first floor. If not no go.  The reason I even worried about it as years ago we stayed in a Holiday Inn in Barrie, Ontario and the first floor was all restaurant, bar, gym, etc. and rooms were on the 2nd and up.  We were on the 2nd and were in bed about 11 at night and the fire signals go off and a maid is banging on room doors getting everyone up and out.  Well no elevator as they shut down automatically when the fire alarm sounds.  We got dressed and went into the hallway and luckily 2 familys were there and the 2 young men offered to carry Harv in the chair down to the lobby.  We found out after this that our section of the hotel wasn't even involved and we didn't have to come down.  It was in another building.
I still think of those 2 young men and how kind they were.  This is why my mind went click when she said 3rd. floor.  Never again.

I finished the boho bag with the Gypsy and am showing a picture of just her so you can see how pretty she is.  I also brought the black dragonfly bag down.  I was going to put it in the Questers Auction but once I did the bonnet I changed my mind.  If I don't use it I can take it home in May and use it for next year.  I have more purses down here then the old saying "More then Carters got Pills".

We did early voting in IL and hope all the Americans who read this were able to get out and vote for their choice. 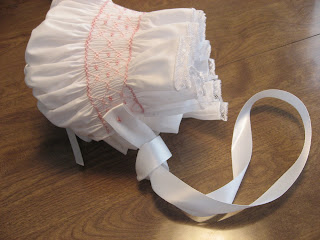 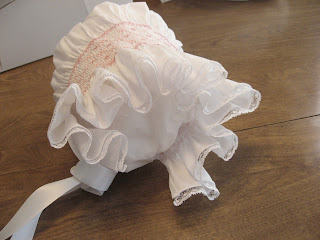 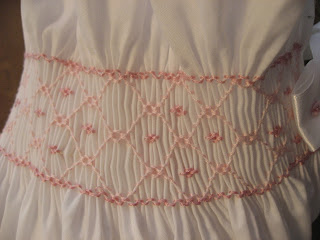 I made this bonnet for our Godey Questers annual auction held each year in Nov.  The money made goes toward our programs and field trips over the year.  We also make large contributions to the Arlington Hts. Historical Museum for various projects.

I used to do a lot of heirloom sewing and smocking when my grandaughter was young then gradually got away from doing it when I went into Crazy Quilting.  Two of the ladies in our group are new Grandmas of a baby girl so I thought this would be a good item.  I also found a 100% wool red, white and black plaid blanket to auction.  The last time I found one of these it went for over $100.00 so will be curious as to what this one will go for.  A lot of the gals have cottages in WI or MI so they are a good cottage item.

We are leaving in the morning for Florida for the winter.  The van is packed and only last minute items to do tonight.  Will see you sometime next week.

I used to do a lot of heirloom sewing and smocking when my grandaughter was little and when she wasn't as gifts for others, etc.  I had not made a bonnet in quite a few years and decided to do one as an auction item.  I also found a 100% red, black and white 100% wool plaid blanket.  Quite a few gals have cottages and last time I found one of these it went for over 100.00.  Nice if it happens again.

I belong to Godey Questers in Arlington Hts and we have an anuual auction one evening in Nov. and each member is asked to donate an item worth 25.00 or more to be auctioned.  Husbands are invited as usually they will spend more or encourage their wives to buy something they like (method to our madness).  The money we make goes to pay for our programs and partially for field trips throughout our year (Sept. to May).

Two of our members had a daughter marry the son of another  member and this Spring the couple had a litle baby girl.  I thought this bonnet would be a perfect thing for one of these grandmothers to bid on.  Their may be a bidding war between the two for who will get to give it to her.

I had fun doing some smocking again.

In case you wonder Questers is a National Organization for women interested in history and antiques which is the theme for our field trips or programs.
Posted by FredaB at 12:01 PM No comments: