Some time ago I saw this pattern on Dianne Knott's blog and she had made the pillow.  I emailed her and Dine very kindly sent me the name of the company she purchased the pattern from. I ordered it and as usual it sat for awhile until one day this spring I got it out and started.  The one problem is it is not a printed piece of muslin but a pattern only that you must use a light box or some other method and trace it onto your fabric.  It took awhile to do this but turned out pretty good I think. 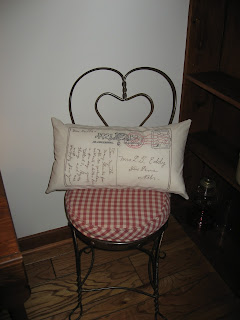 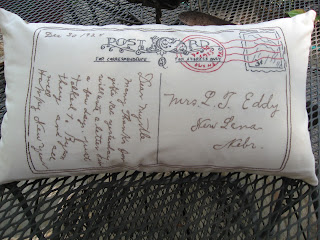 Thank you Dianne for sharing the info.
Posted by FredaB at 3:56 PM 7 comments: 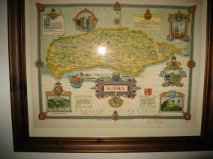 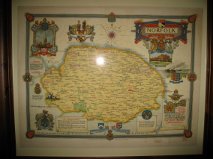 A few years ago at the antique show in downtown Mt. Dora I picked up these two silk prints that appealed to me.  I did not know what I would do with them and just brought them home and put them in a drawer.

I was cleaning out the dresser where I found a couple of the baby sets and came across the prints. We re-decorated our family room recently and I needed pictures to put over my leather sofa.  My daughter and I decided they would make good pictures for that spot.  We were lucky to find 2 frames in brown wood that matched the other wood in the room and were a good fit.

I was scared to iron them as they were fragile so just framed them the way they were.  We used 1" double sided tape around the perimeter and stuck it down to cream mat board.  They were a B to stick down and keep straight as once it touched it could not be moved.  Took the two of us holding our breath to do as good as we did.  All in all they look good enough plus they are old and should not be perfect.counties of Suffolk and Norfolk and exactly what the areas produced during the war. They are really wonderfl as they show  ow many acreages of different foods farmed  including one quarter of all the sugar ration for the entire country. I hope you can enlarge them enough to be able to read them.. 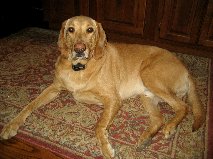 On Sunday we lost a great pal to my daughter's family.  His name was Bauer and he was part of their family for about 6 years.  He was only 8 years old and died Sunday when he suffered a stroke and seizures.

My daughter and family were invited up to a friends cottage in Wisconsin and they left Sat. afternoon and Bauer went to Doggie Day Care where he had been before and where they take very good care of the pets.
Well on Sunday morning the owner and trainer thought he didn't look right and his gums were very pale. He started having seizures.  He was getting the car around to run him to the local emergency vet and when he went inside to get him Bauer was gone.  He tried calling Sue when he first discovered he wasn't well but her phone was in her purse because they were all tubing and water skiing.  It wasn't until they were in the car getting ready to drive home that she checked her phone and saw his messages.  They went directly there and Sue, Jon and their oldest Kyle went in to see him and the owner was very kind to say he would handle getting him to the vets Monday morning as he knew they were in shock over the news.

Their first dog was Teddy who was a golden retriever.  Teddy was theirs before the boys were born so all 3 boys grew up with Teddy.  When Teddy died at age 12 they had to go through all the agony of .vet visits and when they learned she had cancer it was how far to carry treatments and in the end when to let go.

Bauer was the dog who they adopted from a rescue for labs and he was great with the kids and the house right from the start.and the only problem was you had to watch your food if you set something down it was gone in a flash.  I laugh when I think of him doing this.  He would look at you as he slunk away with that sly look.

It was a blessing that this happened when the boys were not home alone with him.  It would have been very traumatic for them so that is one blessing.

I think of the wonderful home he had with acres to run in and 3 boys to play with.  He ended his last years in a very nice life.  Good Bye Bauer.  You will be missed.
Posted by FredaB at 6:58 PM 5 comments:

I should be ashamed to tell you all that I have been cleaning out cupboards, drawers, under the bed chests, etc.and am continually surprised by what I have found that I haven't thought about in years.  I have way too much stuff and am trying to sort out and get rid of a lot of it this summer.  Some I have found homes for and lots of stuff will go to the Salvation Army.  I just redecorated my family room and my sofa and love seat went to the SA.  It was still in good condition but I was tired of it after all these years but someone will be happy to have it.

The title Baby Time is a drawer and box where I found a bunch of baby sweater sets that I had started years ago when my son and daughter were having their families.  I made items for my son's son and daughter then there was a lull and my daughter started.  I started knitting again and especially for a little girl.  Well along came boy #1, boy#2 and finally - yes - boy #3.  All the girl's sets were just put away some not finished and I was knitting mainly for little guys.
My son had another boy a few years later and that was it for them.  Still not another girl- 5 boys and 1 girl we had.

I have been working on finishing the sets, adding ribbon to the bonnets, etc.  I have taken pics of 2 I made.  The pink set and the peach set were made by me.  The little turquoise sweater was made by either my Mom or my MIL - I cannot remember who gave it to me. I have another set or two that need buttons and then I will be finished.  I am giving them to my daughter as custodian for the next generation.  Hopefully some little girls will come along.

The Special Olympics scarf program that I have knitted for the last few years had such an excess last year that they are suspending it for 2012 and using the scarfs they now have.  I am going to buy some blue yarn and start a few baby sets for boys.  They have some darling patterns out now for children so will add blue to the mix.  Who knows if I will be around or still able to knit when the next group arrive.  Our oldest is just 18 and in college and the youngest 2 are 9. 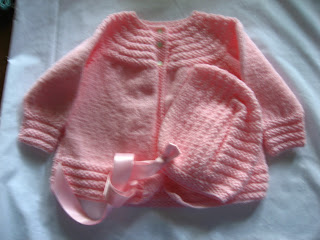 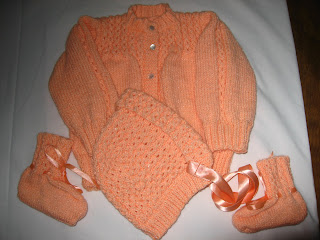 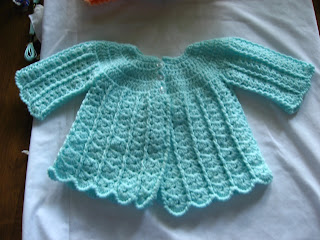 Hope you all had a great 4th. of July. We went as usual to our SIL's parents for their 16th. year of having a huge party.  Fun was had by all.
Posted by FredaB at 7:18 PM 5 comments:

We are suffering through another week of high 90 temps.  One day last week it was 103 at Midway airport.
Needless to say we are just staying in and staying cool.  I had been asking my gardener guys to come and dig out one flower bed where we removed a large tree a couple of years ago.  Now it gets sun most of the day and it was filled mainly with hostas of various color and size. They were huge from all the sun.  One called Big Blue was about 4 feet across.  Well after about 6 weeks they came last week and moved them all to other areas of the yard that are in shade.  I want to replant the empty space but with this heat I am afraid anything I replanted would not take.  I want to put a couple of small roses in there, some Hollyhocks along the fence and some pretty flowers to brighten up the spot.  I went to the nursery and looked at the Hollyhocks they had and they were about 6' tall and all twisty.  At $8.00 a pot I would have needed about 6 or 50.00 worth and so decided to wait and just put in seeds next spring when we return.  I have heard they grow well from seed so will see.  If anyone knows anything about growing them I would appreciate the info. 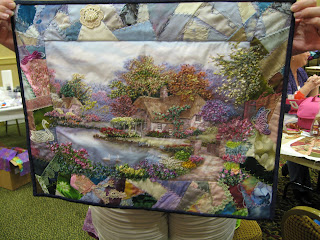 This beautiful picture was done by another of the Kansas group.  No name again.  It was actually one of Di Van Niekirk's  embroidery panels and then she crazy quilted all around with colors pulled from the pic.  It was very nicely done.

I have 3 of Di' panels that I have started working on but haven't got very far.  They are the ones from her books and are made up of various birds, flowers, etc.  After seeing this I think I should get going and try and work on them.  I left them in Florida so next winter will be good to do that.

I have a few more pictures from the retreat to share with you.  Next time I do this I will try and get the person's name along with the pic.  I should also explain what kind of retreat this is.  There are no classes and teachers - now saying that with the quality of the gals that are attending there should not be anything you would like to learn that someone cannot help you with.  Mary Anne arranged for us to rent this very large meeting room and we all shared the cost of it.  the retreat ran from Tues. until sun. am and some were there all the time and others arrived and left when they had to.  We split the cost of the room and it was only $30.00 each for the full five days.  They were very helpful bringing in extra chairs, tables, etc. whatever was needed. The only other cost was your transportation and your room in which case most gals shared with another so that kept the cost down.  Some bought machines to stitch and others hand sewing.  There is a tremendous amount of shopping for CQers in that area and the girls made good use of the stores.  If you flew in there was always someone with a car who would take you along. 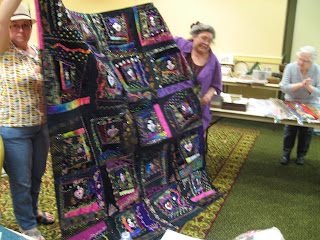 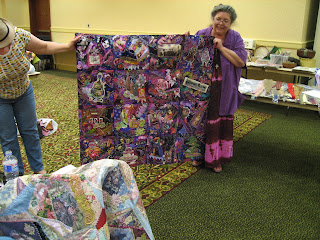 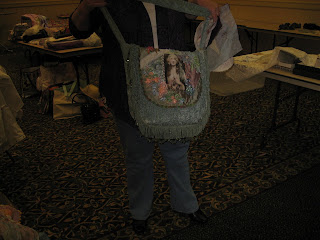 The above pictures show 2 new quilts that Martha Green (shown in the pic on the right) has made.  They were both typical Martha and were to die for.  The one in the second picture is Martha's CQJP project for this year.  In Martha's words "it makes me too nervous to have something unfinished so I just had to do the whole year") and if you are counting I believe there are 16 blocks in total.  She made extra to get the size she
wanted.
The third picture is of a Boho Bag made by one of the gals from the Kansas group.  No name again but for you readers that get Pat Winter's CQ magazine I was told that this was in the Spring issue.  It was beautiful and I am sure the magazine pictures did it farmore justice then mine above.
Posted by FredaB at 5:07 PM 2 comments: